A while ago I saw controller devices for Lightroom. And with some searching I found out that you actually can use and MIDI controller to get that done.

So, after some research:

Hint#1: You need a controller with "endless" knobs. Those with a fixed range will get you into trouble.

Hint#2: If you use sliders/faders, you want motorized ones.

I found out, the Behringer BCF-2000 is exactly what I wanted. 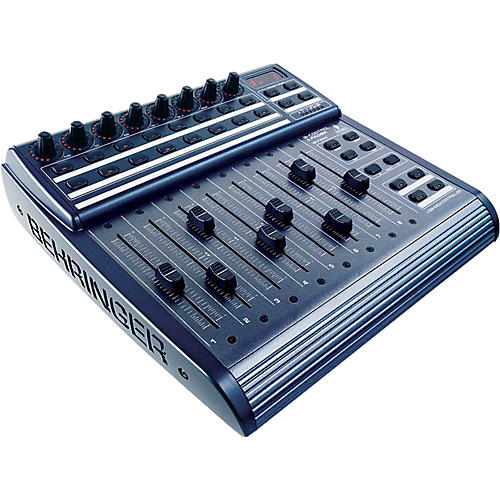 So, I started looking at eBay and our Craigslist equivalent for used ones and got a really cheap one.

Hint #3: Reset the device. They are programmable and you don't want to deal with the stuff the previous owner configured.

I found out there's a device called PFixer (hardware/software combo), but you can just buy the software. So, my first adventure with MIDI+LR was with PFixer. Advantage: PFixer used BCF-2000s for their first devices, so the software included a complete configuration for it. I also bought laberls for a neat look.

But....it didn't impress me. So, the device started to collect dust.

Next try: I uninstalled PFixer and moved to MIDI2LR. I manually configured it to match the labeling already on my BCF. Didn't get everything to work yet, but I really like MIDI2LR. It's way faster than PFixer and now editing with the controller really makes fun!

But I realized I have to move some functions. So, the next step will be to reconfigure the sliders/buttons and make a new label for it....

Anyone else using a MIDI controller and especially using MIDI2LR?

I've just started using one, and haven't yet figured out the optimal set up of buttons and dials, so I'm kinda ad hoc'ing it. Using the small Behringer minitouch ($50US).

Works amazingly well. A-MAZING. Right now I'm concentrating on the basic panel in Lr along with some nav tools, but will probably add more. Basically it's like using shift to add a bunch of alternate controls, like moving from panel to panel in Develop.

And it's not so much the increase in speed. It's being able to adjust without ever taking your eye off the image; turning a dial just seems more intuitive than keys or a mouse.

Hat's off to the geniuses that figured this out, and Adobe for including the capability.

“Art is not what you see, but what you make others see.”
— Edgar Degas

I've been using a Behringer X-Touch Mini with MIDI2LR since last spring sometime. Don't use it for casual or one-off adjustments, but I love it when I'm working on a lot of images at once. It changes the "feel" of editing in LR, and I find it quite enjoyable. Highly recommended.

I've used this one for some time.  The author is very helpful and open to suggestions.

How did you set up "Rotate clockwise" and "Rotate counter-clockwise" with MIDI2LR?

ernstbk • Veteran Member • Posts: 3,169
Re: LRControl: another software for midi controllers for Lightroom
In reply to PerTulip • Dec 8, 2017

How did you set up "Rotate clockwise" and "Rotate counter-clockwise" with MIDI2LR?

If I understand your question correctly then you are asking about rotating the photo.

This can be done by specifying the keyboard shortcuts for RCW and RCCW using the MIDI2LR plugin options (under Other...) and then you can assign these keys to a button.

Please be aware that you may have a problem if you are using the english version of LR with a non-english keyboard.

JimiV • Regular Member • Posts: 436
Re: LRControl: another software for midi controllers for Lightroom
In reply to PerTulip • Dec 8, 2017

I've used PFixer with the Behringer BCF2000 for some time and can't imagine going without it.  Greatly speeds up my workflow.

Good luck and have a nice day!

Everything should be available already

I used the Behringer BCF2000 for a while, now use the Behringer Extremist (worth the change).  Both were controlled by PFixer from Pusher labs.   Super fast workflow for getting through event photos quickly.

I used the Behringer BCF2000 for a while, now use the Behringer Extremist (worth the change). Both were controlled by PFixer from Pusher labs. Super fast workflow for getting through event photos quickly.

...Behringer Extremist (worth the change)....

What's the advantege of the Extemist compared to the BCF2000?

It has one more slider!

Actually, I like the default mappings more and the additional rotators and buttons also help.  It's been over a year since I switched and really don't remember the old set that well to give a better or more complete explanation of the differences.  It did bring over the presets I had programmed into a couple of the rotators 'push' function.

At first there was a bit of a learning curve again, but it was a good change.