The 'Simple Use' camera is safe to use down to 10m (33ft) and comes in two pre-loaded options using Lomography's Color Negative 400 and LomoChrome Purple film stocks.

Whether you're hitting the beach in the Northern Hemisphere or the ski slopes in the Southern, a rugged compact camera makes a great companion. In this buying guide we've taken a look at nine current models and chosen our favorites.

The WG-70 is Ricoh's latest ultra-compact in its WG series of rugged cameras. It features a 16 Megapixel backside-illuminated sensor capable of capturing 1080p (Full HD) video and features a number of dedicated shooting modes for underwater and macro photography.

Nearly four months after first announcing the CoolPix W150, Nikon has announced the pricing and availability of the camera in the United States.

Summer is here, which means it's time for Chris and Jordan's roundup of new waterproof cameras for 2019: the Olympus Tough TG-6, the Ricoh WG-6, and the Panasonic TS7. Find out which one is right for your next vacation.

Whether you're headed to the beach or the ski slopes, a rugged, waterproof camera lets you focus on your adventure instead of worrying if the camera will survive. Find out which model is the best-in-class in our waterproof camera buying guide.

The Olympus TG-5 is one of our favorite waterproof cameras, and the company today introduced the TG-6, a relatively low-key update. New features include the addition of an anti-reflective coating on the sensor, a higher-res LCD, and more underwater and macro modes.

We've long held Olympus' Tough cameras in high regard and the TG-6 is no exception. It offers top notch image quality for its class and lots of useful features. It's also a blast to shoot with.

A fresh crop of ready-for-anything compacts has been added to our buying guide – just in time for Spring Break.

Ricoh's new WG-60 is a waterproof camera with good rugged credentials, a 16MP BSI-CMOS sensor and built-in macro ring light. The camera is nearly identical to its predecessor, with support for FlashAir Wi-Fi SD cards being the only change. 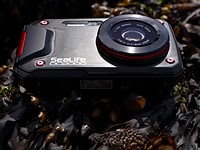 Someone finally made a 1"-sensor compact with a fixed prime lens that can take great photos, but it's aimed at Scuba enthusiasts more so than land-based photographers and has a few operational quirks.

This week on DPReview TV, Chris and Jordan prepare for the summer holiday season by putting several popular waterproof cameras to the test. If you're considering a rugged camera for the beach or pool this summer, or if you just want to see what a Chris and Jordan fishing show might look like, tune in.

The Inrigo backpack features several unique features for a waterproof backpack, from a resealable-bag-style zipper that can be opened very quickly, to a bluetooth sensor that lets you know when moisture gets inside.

Casio's bionic-looking new action camera, the GZE-1, is built with extreme sports in mind. The little camera is drop-proof, freeze-proof, dust-proof, and waterproof to 50 meters.

Garmin has entered the 360-camera market with the VIRB, which captures 5.7K video at 30p as well as 15MP stills.

COOPH wants to keep you and your photo gear dry in a specially designed, waterproof jacket that won't cramp your style. Read more

GoPro has introduced the HERO4 Session, a cube-shaped waterproof camera that is half the size of and 40% lighter than its other HERO4 cameras. The HERO4 Session is waterproof to a depth of 33ft/10m without requiring a separate housing and features one-button operation. Read more

Most cameras are delicate objects, and the last thing you want to do is drop them or subject them to wet or freezing conditions. But there are cameras which are specifically designed to handle rough treatment. In this list, we've chosen our top five recommendations for waterproof cameras.

For those of us here in the Northern Hemisphere summer is upon us. We're celebrating the arrival of longer days and seaside vacations with our annual waterproof compact group test. This year's test includes the Canon PowerShot D30, Nikon Coolpix AW120, Olympus Tough TG-3, and Ricoh WG-4 GPS. See which of these rugged compacts came out on top.

Nikon has announced US pricing and availability of its J4 1-System mirrorless camera. Originally launched last month, the J4 features an 18MP CX-format sensor with an improved Hybrid AF system. The company has also announced a new WP-N3 waterproof case and SB-N10 waterproof Speedlight. The underwater housing allows the Nikon 1 J4 and S2 cameras to be taken to depths of of 45m (148 ft). The new Speedlight is waterproof up to 100m (328 ft). Learn more

An Olympus camera lost by a Finnish diver on a trip in Thailand has made its way back to its owner. Reported by the travel site Sail In Finland, in January the Finnish diver's tethered camera floated away after some rough weather. The point-and-shoot was found the next day by Krzysztof Torzynski, a Polish diver from Denmark who was in the same waters. He then used photos on the camera to look for the owner. Learn more

The Nikon 1 System has been around for a couple of years now, but the emergence of the AW1 signals a radical departure from what has been the norm. Functionally very similar to the 14MP J3 which Nikon announced earlier this year, the AW1 is waterproof to 15m (49ft), shockproof from 2m (6.6 ft), and freezeproof. It's being announced alongside two equally rugged lenses, and a range of colorful silicone skins for underwater and wet weather use. We had the opportunity to use the new camera recently, and we've put together a first impressions review covering its design, operation and key features. Click through for a link.

Well now here's a pleasant surprise - Nikon has released a rugged, waterproof mirrorless interchangeable lens camera - along with a pair of equally tough lenses - for a starting price under $800. Those familiar with Nikon film cameras may fondly recall the days of the Nikonos, with which the company dominated underwater photography from the 1960s onward.

So-called 'blimp' cases are designed to greatly reduce the sound of a camera's shutter, making it safe to take record shots during filming for TV and movies. Typically, commercial blimp cases cost upwards of $1000, but pro photographer Dan Tabár made his own using a Pelican case, some ABS pipe fittings, a wireless shutter release, and other simple parts sourced at a hardware store, for around $80. Click through to see how well it works for both sound suppression and underwater shooting.

We've just posted the second in our series of rugged/underwater camera reviews. This time around, we're taking a look at the Olympus Tough TG-2 iHS, whose main claim to fame is its 25-100mm lens, which has a maximum aperture of F2 at wide-angle. The TG-2 also boasts a fully-featured GPS, limited manual controls, wireless flash control, and a unique 'tap control' feature. For all the details - and our conclusions - follow the link.

Olympus, along with Pentax, is one of the pioneers of the underwater/rugged camera. Its first camera, the Stylus 720 SW, was introduced back in 2006, and the rest is history. Many, many generations of rugged cameras later, the Tough TG-1 iHS arrived, and it brought something new to the genre: a fast, F2.0-4.9 25-100mm (equivalent) zoom lens. This was a significant improvement over the slow lenses normally found on tough cameras. Two other notable features were support for conversion lenses, and limited manual exposure control.

Pentax has announced a white version of its WG-3 rugged waterproof camera and an entry-level point-and-shoot compact. The white version of the WG-3 shares all the features with the existing model but comes in a different color scheme (we'll let you guess what that is). We'll be testing the GPS version of the WG-3 as one of our forthcoming waterproof camera tests. Meanwhile, the 'Efina' is an inexpensive 14MP CCD-based camera that's exactly the sort we thought Pentax had stopped making. Still, it comes with decorative patterns on it, which seems to be this season's thing - so that's something. The Efina, announced in Japan in January, will cost around £80, while the white WG-3 will retail for $299/£289.

CP+ 2013: With the WG-10 Pentax has created a more affordable waterproof digital camera, one that still withstands depths of 33 feet, as well as the usual drops, dust, cold, and pressure. With a 14MP CCD sensor, Pentax says the camera can produce 'poster size' images thanks to its new imaging engine, and can also capture 720p videos. Its 5x lens zooms from 28-140mm equivalent.

CP+ 2013: Pentax announces the WG-3 rugged digital camera, available with and without a built-in GPS. Both versions feature an image-stabilized 16MP CMOS sensor, and now an F2.0-4.9 lens with 25-100mm equivalent zoom. Both are also waterproof down to 45 feet, drop-resistant from heights of 6.6 feet, dust-resistant, and can handle temperatures down to 14F. Finally, they're back-pocket-safe, meaning you can sit on them and they're still likely to work (they can handle up to 220 pounds of pressure).

CES 2013: Fujifilm has announced the FinePix XP60, the latest addition to its rugged waterproof line of compact cameras. The 16MP XP60 is waterproof down to 6m (20 feet), has a 5x optical zoom lens, image stabilization and can record 1080i60 video. A dedicated 'burst mode' button offers up to 10fps at full resolution. The camera also comes with a sweep panorama mode as well as several effects filters. The XP60 will be available in March.

CES 2013: Panasonic has announced the Lumix DMC-TS5 (FT5 in Europe) and TS25 (FT25 in Europe) compact waterproof and shock-resistant 'adventure' cameras. The higher specified TS5 is waterproof at depths of up to 12m (39 feet) features a 28-128mm equiv 4.6x zoom lens, 1080p60 video and Wi-Fi capability. New on offer is Near Field Communication (NFC), a close-proximity radio connection that the camera can use to initiate a Wi-Fi connection with a compatible device simply by tapping the two together. The cameras will be available at the end of March in a range of colors.

Weatherproof, splashproof, waterproof - these are popular terms in the camera manufacturers' marketing material but what do they actually mean? Rob Spray takes a closer look at environmental protection standards and explains them in this article.