Panasonic has done something Olympus claimed impossible; squeezing a built-in flash into a body this small (perhaps because there's a little extra room without the in-body IS). It's a cunning and rather complex design that lifts part of the top plate clear of the camera to reveal the small - but perfectly functional - flash. It has a Guide Number of just 6, rather than the 12 or 13 we're used to seeing on entry-level DSLRs, but it does the job for social snaps and fill-flash (and is a lot better than nothing). The flash is activated using the button on the rear of the camera (and flash mode controlled using the standard screen interface).

After the G1, GH1 and Olympus E-P1, the GF1 is now the fourth camera to make use of the new, miniaturized Micro Four Thirds mount. Remove the lens and you'll be confronted with an exposed sensor - it's of the familiar Four Thirds size but rather disconcerting to see it in the nude. The focal plane shutter stays open until the point an exposure is made.

Supplied In the Box

The GF1 will initially be available as a kit with the LUMIX 14-45mm or 20mm F1.7 lenses, or as a body only. The camera is available in black, red or silver.

The DMC GF1 body is supplied as: 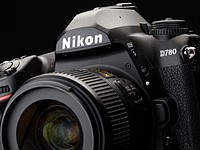 Exploring creativity with the Fujifilm X-Pro3

Join fine art photographer Eirik Johnson as he travels the Duwamish River, documenting the sights and scenes of this important waterway with the Fujifilm X-Pro3.

Video: Three types of photographers, illustrated by the 'The Grand Tour' trio

Jeremy, Richard and James of The Grand Tour use a photo expedition in Chile as a means to poke fun at three different types of photographers you might find out in the wild.

Hands-on with the Nikon D6 at WPPI

We stopped by the Nikon booth at the 2020 Wedding and Portrait Photography International Expo in Las Vegas to get our first in-person look at the Nikon D6, the company's latest flagship sports DSLR.

DPReview TV used the Fujifilm X-T4 to document some local culture in Alberta, Canada. In this sample gallery you'll get to see cowboys, cowgirls, the novel sport of 'skijoring' and the Calgary Farmer's Market.

Based on the bandage on the drone operator's face, they might want to reconsider going back to a basic drone safety class.

The institution plans to release another 200,000 public domain images later this year.

In addition to improved metadata handling, customizable keyboard shortcuts and more, Affinity Photo can also open and edit Canon CR3 files as of this 1.8 update.

We've officially launched our analog forum, a place to discuss film, film cameras and film scanners. Jump on into the discussion!

Canon's upcoming full-frame mirrorless camera, the R5, is on display at the company's booth at the 2020 Wedding and Portrait Photography International expo in Las Vegas alongside the new RF 100-500mm lens.

Hands-on with the Fujifilm X-T4

The long-rumored and much-anticipated Fujifilm X-T4 has finally landed. While it has much in common with its predecessor, the X-T4 comes with some major changes.

The Fujifilm X-T4 makes some big promises, but can it deliver? Chris and Jordan put it to the test and tell us if this is the Fujifilm camera we've all been waiting for.

The sensor inside the new Fujifilm X-T4 is a known quantity – as it's straight from the X-T3 – and that's a good thing, since it's excellent. Check out our pre-production sample gallery to see how the image quality looks on the X-T4.

Fujifilm has announced its latest stills/video hybrid camera, the X-T4. The biggest change is undoubtedly its in-body image stabilization system, but its improved AF system, redesigned shutter and video-related updates are also notable.

Both models feature a wired design for powering them from a wall outlet or other AC power sources.

The project provides an unprecedented look at New York as it existed more than 100 years ago by upscaling, increasing the frame-rate and colorizing century-old video footage.

Mathieu Stern recently discovered a time capsule in his family's home that had a number of 120-year-old glass negatives inside. To bring the images to life, Mathieu developed positive prints from the negatives using the cyanotype process.

The tech could 'significantly' improve compression efficiency and help improve the trust of JPEGs in a world where fake news is an increasing problem.

In honor of National Peanut Butter Lover's Day (yes, it's a thing—we checked), peanut butter manufacturer Jif has teamed up with GIF-hosting platform Giphy to release a limited-edition jar of peanut butter that's meant to settle the hard/soft 'G' debate once and for all.

Sony just launched its newest fast aperture wide-angle prime for its full-frame Alpha lineup, and we've been shooting planes, people and felines with it over the past few days. Read our initial impressions and check out our sample gallery. Spoiler alert: it's a near perfect optic.

Sony is adding a new wide prime to its full-frame E-mount series: the 20mm F1.8 G. It's slightly smaller and lighter than the existing FE 24mm F1.4 GM and will go on sale in March for $900.

The 'KD-K1' keyboard manages to pack in multiple USB ports, an HDMI output and an SD card reader

The Kolude KD-K1 features four USB-A ports, two USB-C ports, an HDMI port, an SD card slot and a microSD card slot, all inside a slim, but full-size keyboard.

Video: Mathieu Stern says LomoMod No.1 is the 'worst camera' he's ever tested

Despite receiving two camera kits, Stern wasn't able to capture many shots due to a faulty film advance wheel.

The 1.26x magnification ratio means Nikon F-mount lenses mounted to Fujifilm GFX camera systems using the adapters will keep their native diagonal field of view, albeit at the cost of 2/3 stops of light.

We did a lot of shooting with our pre-production Canon EOS-1D X Mark III, and now that the camera has official support, we've provided out-of-camera Raw files and some Raw-to-JPEG conversions for your perusal.

Sony is updating its flagship Xperia 1 smartphone with faster burst shooting, a bigger sensor in its standard camera and a time-of-flight sensor. And thanks to popular demand, the 3.5mm headphone jack is back.

Feb 24, 2020379mobile
Tips or suggestions? Contact us!
More articles »
www.dpreview.com
Follow us
Mobile site
About
Editorial content
Cameras & Lenses
Community
All content, design, and layout are Copyright © 1998 - 2020 Digital Photography Review All Rights Reserved.
Reproduction in whole or part in any form or medium without specific written permission is prohibited.