Radical. Futuristic. I heard several descriptions leveled at the 4900Z while at Photokina 2000 this year. Certainly when Fujifilm first hinted and then later announced the 4900Z a lot of people oohed and ahhed at the design. Echoes of SLR, yet modern looks and an attractive feature set. Officially the 4900Z is a replacement for last years 2900Z. In my mind it's much more of a camera than the 2900Z was.

The 4900Z is targeted at the "prosumer" market, those users who are looking for a digital camera with manual features and good image quality without having to spend a small fortune on digital SLR kit. The 4900Z specifications are impressive, a full 6x optical zoom, auto and manual focus, a 2.4 megapixel SuperCCD generating 4.3 megapixel images, full manual exposure options, majority of controls on the outside of the camera and a LCD viewfinder (0.556") (dubbed EVF; Electronic View Finder by Fujifilm) which means an "almost real" TTL view from your eye directly through the lens.

The 4900Z has the same "Honeycomb" SuperCCD's found in the 4700Z. The major difference between a SuperCCD and standard CCD is the orientation of the CCD pixels. In a SuperCCD they're orientated in a diamond formation, turning this into a square image requires interpolation which generates a higher pixel count.

The Fuji 4900Z has a 2.4 megapixel SuperCCD which generates a 4.3 megapixel image (2400 x 1800). This means that the cameras internal systems are processing those diagonally orientated pixels to generate the image... The jury is still out as to whether this is a good thing or not (it's definitely worked for the S1 Pro which features a 3.2 megapixel SuperCCD but less so for the 4700Z), the SuperCCD design does lend itself to higher sensitivity thus the 4900z has a lowest sensitivity of ISO 125 and highest of ISO 800. Interesting note is that Fujifilm have introduced the lower ISO of 125 with the 4900Z.

Tags: review, fujifilm
Next page
TABLE OF CONTENTS
Gear in this story
Support DPReview. Shop with 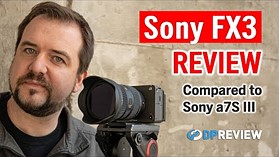 Days Inn offers a $10,000 payday and free travel within the U.S. to a talented photographer

Days Inn by Wyndham has brought back its 'Sunternship' program for 2021. This August, a selected photographer will be paid $10,000 and have their travel expenses covered during a customizable two-week trip within the United States.

DPReview TV's Jordan Drake thinks the iFootage Cobra 2 is the best monopod ever created in the history of mankind. Find out why he calls it 'the monopod that changed my life'.

We've updated our 'best cameras for videographers' buying guide, with the Panasonic Lumix DC-S1H being our choice for high-end video shooters, and the Sony a7S III selected as the best "run-and-gun" option.

Sony’s three remaining A-mount DSLR cameras have disappeared from its website, suggesting the cameras have been discontinued, rendering the A-mount system all but obsolete.

Law firm Hagens Berman has filed a suit against Samsung in US District Court. The lawsuit alleges a widespread defect in Galaxy S20 smartphones that causes the glass covering the rear cameras to shatter.

Exploring wine country with James Joiner and the Fujifilm X-E4

In this video, we head into the heart of wine country in the company of photographer James Joiner and the Fujifilm X-E4. James is meeting vintner Charles Bieler to shoot some imagery for a new wine label.

DJI released a statement today confirming that there are issues with the batteries that power its Mini 2 drone.

Video: Emmy-winning storm chaser has his drone sucked into a tornado while filming

Brian Emfinger from Live Storms Media got close to a tornado with his drone before losing it. Here is some footage he managed to pull from the DJI GO 4 app.

The video was captured by a photographer/pilot duo who used an Insta360 Pro 2 attached to a DJI Matrice 600 drone to capture the close-up visuals of Iceland’s Mt. Fagradalsfjall volcano.

Canon's EOS M50 Mark II is a compact, easy-to-use mirrorless camera. Check out our sample gallery for a large selection of tulip photos, with a few other subjects thrown in for good measure.

The Olympus OM-D E-M10 IV is a compact, stylish and low-priced Micro Four Thirds camera with a 20MP sensor and in-body stabilization. Chris and Jordan put it through its paces in the latest episode of DPReview TV.

Our team at DPReview TV just wrapped up their review of the Olympus E-M10 mark IV. As Chris explains, it's now 'third winter' in Canada, so don't be surprised to see some snow in this sample gallery.

Michael Collins, 'the loneliest man in history' and Apollo 11 astronaut dies at 90

Michael Collins, an Apollo 11 astronaut known as the 'loneliest man in history,' passed away at age 90 from cancer.

The dog food company, Iams has launched a new app, NOSEiD, that photographs and scans dog noses to identify lost pups and help reconnect them with their owners.

CIPA's March 2021 data is out, showing the industry is starting to stabilize after a tumultuous 2020 that saw the COVID-19 pandemic affect nearly every corner of the industry.

The absolute beginner’s guide to film photography: Which camera type is right for you?

Looking to get into film photography? Whether you're hunting for a pocket-sized companion, a camera to learn and grow with, or something capable of the best image quality possible, we've got advice for you.

Hubble captures star ‘on the edge of destruction’

A recent article in Architectural Digest shares how Hungarian artist Andi Shmied used a bit of social engineering to capture photographs of some of New York City’s most opulent pieces of real estate.

The city of Helsinki, Finland has put over 65K historical images under Creative Commons

The gallery, which includes images dating back to the early 20th century, displays everything from portraits of everyday life to architectural photographs of iconic buildings in the Finnish capital.

DJI Air 2S vs Mavic 2 Pro: which should you choose?

The DJI Air 2S addresses one of the most common feature requests from drone users: a a 1"-type sensor camera on a consumer-oriented model. We compare it to DJI's other foldable drone with a 1"-type sensor, the Mavic 2 Pro, to see how it stacks up.

Our team at DPReview TV recently reviewed the new Sigma 35mm F1.4 DG DN. This gallery includes many of their test photos so you can judge image quality for yourself.

ImagenAI recently announced its new desktop app for Mac and PC. Using artificial intelligence, it will automatically edit batches of your photos in Lightroom based on what it has learned from your past editing preferences.

Atomos has announced a paid H.265 update for the Ninja V and announced two new monitor/recorder products, the Ninja V+ and Ninja Stream.

Apr 28, 202198
Tips or suggestions? Contact us!
More articles »
www.dpreview.com
Follow us
Mobile site
About
Editorial content
Cameras & Lenses
Community
All content, design, and layout are Copyright © 1998 - 2021 Digital Photography Review All Rights Reserved.
Reproduction in whole or part in any form or medium without specific written permission is prohibited.