We'd love to cover more platforms but having just upgrade all our machines to Windows 2000 and not being a Mac house (anyone want to lend us their G4 to test the Wallet?) I can only cover the Windows 2000 drivers... Sufficient to say that with drivers installed the Wallet operates just like an external hard disk which means that its use on different platforms is almost identical.

Hook up the Digital Wallet for the first time and you'll have to install the drivers, supplied with in the box is a CD-ROM with drivers for Windows 98, Windows 2000 and MAC (OS 8.6+). Simply select the appropriate driver from the CD-ROM and after a few seconds you'll have a new device and hard disk installed, here's what the Windows 2000 Device Manager sees:

That's basically it, the Digital Wallet then acts as another drive, you can drag and drop between it (feels quite fast, exact timings in the Timing section of this review). When you've finished with the drive you must remember to tell Windows 2000 to stop the device before you unplug it:

If you don't you'll get a nice message like this: 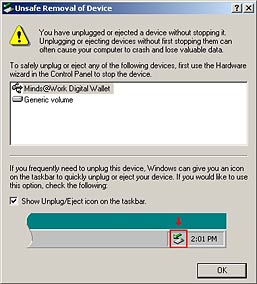 One other note, it's not advisable to use the Digital Wallet on battery power when connected by USB, although it does work as soon as the device power saves (30 seconds of inactivity) you'll get the same unsafe removal error above. If you're quick then it shouldn't be a problem...

Supplied with the Digital Wallet are the following applications:

Leica M11 Review - The most enjoyable M-series camera yet?

Steve Shapiro, known for his memorable Civil Rights photojournalism, died on Saturday at age 87 after a battle with pancreatic cancer.

After reports Canon was going to partially shutter its Zhuhai factory, DPReview has confirmed with Canon Inc. that it will shut down its Zhuhai factory in south China, which is responsible for the production of compact cameras and some video equipment.

DPReview TV: What we know (and think) about the Canon EOS R5C

Jordan from DPReview TV was pretty stoked to learn about the EOS R5C, a Cinema EOS motion picture camera and an EOS R5 stills camera all in one. Find out what he thinks of this new hybrid model based on what we know so far.

The Canon EOS R5C looks a lot like an EOS R5 with a fan mounted on the back. Its greatest weakness stems from the degree to which this is true but so, perhaps, does its greatest strength.

Canon announces the EOS R5C, a Cinema EOS and a stills camera all in one body

Canon has announced the EOS R5C, the newest member of both its EOS line of still cameras and its Cinema EOS motion picture system. It effectively combines an EOS R5 mirrorless camera with a pro-level Cinema EOS camera, all in a single body, and provides use case-specific operation right down to the menu system.

Sunshine, showers, fog and a civil rights march - it must be January in Seattle. Since it was launched last week we've been out and about with the Leica M11, and we've prepared a gallery of samples from our pre-production camera. Click through to check them out.

Capture One ends its brand-specific versions for Fujifilm, Nikon and Sony cameras

Capture One has announced that it is no longer selling brand-specific versions of Capture One. The company has also revealed plans to offer existing customers the latest version of Capture One Pro.

Sony and the World Photography Organization have announced the shortlist for their Student & Youth awards. We've rounded up some of the shortlisted photos into a gallery.

Japanese photo site Digital Camera Life (DC Life) has discovered the sensor inside Sony's flagship a1 camera is the IMX610, a full-frame backside-illuminated sensor that appears to be exclusive to Sony.

Video: Watch a potato, a roll of toilet paper and a shoe get turned into pinhole camera 'lenses'

Director and photographer Simon Meyer has taken to TikTok to show off how he creates his unusual collection of DIY 'lenses' made from various household objects, including potatoes, toilet paper rolls, shoes and even an Elmo stuffed animal.

This full-sized wooden Nikon F replica, complete with interchangeable lens, can be yours for $149

Etsy seller CameraTins' is selling a full-sized Nikon F replica made entirely from wood. The kit includes the camera body as well as a replica Nikkor 55mm F1.2 lens.

The Leica M11 is a great platform for M-mount lenses, but arguably, its modern capabilities bring into question the future of a camera that builds so much on heritage.

Hands-on with the new Leica M11

The M11 is the latest in the Leica's series of rangefinder cameras, which date back to the early years of the 20th century. While it may look like Leicas of the past, it offers technology that 20th Century film photographers could never have imagined.

Can you get a great lens for $125? We tested the 7Artisans 55mm F1.4 to find out. How does this budget friendly lens compare to the medium- and high-end lenses we usually review?

This week our team at DPReview TV tested the 7Artisans 55mm F1.4 Mark II, a budget APS-C lens. Check out their sample gallery to see how how it performs.

Let's be honest—these aren't going to have the best image quality. But for only $75 for the 10mm F8 fisheye and $60 for the 27mm F2.8 prime lens, Rockstar is driving a hard bargain for both of the compact prime lenses.

Video: An overview of the DJI OM5 with Atola Visuals

In this video we are joined by Atola Visuals to get an in depth look at the DJI OM5 - a powerful 3-axis gimbal for smartphone videographers and vloggers.

Film Friday: Is the 'new' Fujifilm 200 film just rebranded Kodak Gold 200? Is sure looks like it

A macro film shot by Russian filmmaker Vadim Sherbakov on a DJI Pocket 2 is inspiration for creating during cold winter months and lockdowns in some parts of the world.

Security researchers at ZecOps have developed a trojan proof of concept tool that can inject code into three crucial iOS daemons. The tool simulates a shutdown, keeping the phone powered on in a simulated 'off' state, leaving the device vulnerable to infiltration and monitoring.

The Leica M11 may look like the other M-series cameras that came before it, but it has some notable upgrades and changes. Find out why Chris thinks it's the most enjoyable 'M' camera he's used.

The Leica M11 includes numerous updates, but for many the headline feature will be the camera's 60MP BSI CMOS sensor. How do those beautiful Leica lenses hold up to high resolution? Check out our sample gallery from DPReview TV to find out.

Leica has announced the M11, the newest member of its M-series rangefinder line of cameras. It's headline spec is a new 60MP BSI CMOS sensor, but it also includes useful features like a larger battery, internal storage, a redesigned baseplate and more.

Jan 12, 202220
Tips or suggestions? Contact us!
More articles »
www.dpreview.com
Follow us
Mobile site
About
Editorial content
Cameras & Lenses
Community
All content, design, and layout are Copyright © 1998 - 2022 Digital Photography Review All Rights Reserved.
Reproduction in whole or part in any form or medium without specific written permission is prohibited.