The DIGITAL IXUS 330 (known as the PowerShot S330 in US/Canada) is Canon's updated to the popular IXUS 300 (PowerShot S300). The IXUS 330 is a steel cased, two megapixel, three times optical zoom ultra-compact "carry everywhere" digital camera. The DIGITAL IXUS 330 was announced at CeBIT 2002 along with the updated DIGITAL IXUS v² (two megapixel, two times optical zoom). The IXUS 330 has various new features and improvements over last years model (see below) but best still is that the street price of this camera appears to have settled some $200 less than its predecessor ($400 street price in the US). 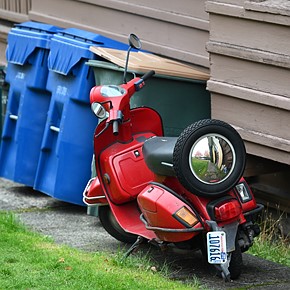 Fujifilm has announced a special version of its 100MP GX100, for infrared imaging. The new camera will be available for special order in early 2021.

The event, which will show off a new 'DN' lens for mirrorless camera systems, is set to take place at 7am ET (4am PT) on December 1.

Video: 'One Shot' shows what it takes to capture an iconic image at the Olympic games

The 'One Shot' documentary highlights the incredible amount of preparation and work involved in photographers capturing iconic moments in Olympic history. It also features nearly 150 wonderful images from past Olympics games.

The adapter will bring full autofocus, aperture control and EXIF data transfer capabilities to Pentax K-mount lenses when used on select Sony E-mount camera systems. No price is given at this time, but the adapter is set to be available by the end of the year.

In a year when social distancing became a way of life overnight, Senior Editor Barney Britton maintained a small sense of connection via the Fujifilm X100V.

We've rounded up a collection of the best deals currently active on cameras, lenses, software and accessories. This will be a living article that gets updated throughout this holiday week, so be sure to check back to keep up with the latest offers.

Canon's RF 85mm F2 Macro IS offers EOS R-series shooters an affordable, stabilized and fast-ish portrait prime. Take a look at what it can do.

Slideshow: Winners and finalists of the 2020 Ocean Photographer of the Year awards

Oceanographic Magazine recently announced the winners of its 2020 Ocean Photographer of the Year awards.

Best gifts for photographers in 2020

For many of us, photography is a welcome retreat from the raging storm that is 2020. If you happen to be shopping for a photographer this season, we've got some gift ideas that we think will help enable and enrich this pursuit.

Finnish company VALOI has launched a new Kickstarter campaign for the VALOI 360 film digitizing system. By combining the VALOI 360 with a digital camera and light source, you can easily digitize your rolls of 35mm and 120 film.

Smartphones capture amazing video, but to kick production value up a notch consider adding a compact gimbal to your kit. This week, we test three leading smartphone gimbals: The DJI OM 4, the Moza Mini MX and the Zhiyun Smooth XS.

Don McCullin's illustrious career is set to arrive on the silver screen in a new film adapted from McCullin's autobiography. Tom Hardy is set to star as McCullin with Angelina Jolie directing.

In addition to the 23mm and 33mm F1.4 lenses it announced for Fujifilm cameras, Tokina has also unveiled a 17–35mm F4 lens for Canon EF and Nikon F mount camera systems.

Buying guide: The best gifts for film photographers in 2020

From funky film stocks, to home developing and digitizing solutions, we think these are the best film photography gifts in 2020.

Chroma Cameras has announced the 679 camera system. It is a modular medium format camera system allowing photographers to easily, and affordably, build a versatile 120 film camera for multiple lens systems and film backs.

Halide Co-founder and Designer, Sebastiaan de With, has shared an incredibly detailed analysis of the iPhone 12 Pro Max's camera tech and explains why the changes, compared to the iPhone 12 Pro, are far more impressive than initial reviews suggested.

Camera battery design has been relatively unchanged for years, but new Kickstarter campaign for the X-tra battery hopes to upend convention and give photographers a more powerful, quicker and better camera battery.

Nikon unveiled the Z6 II last month, adding some more processing power and a few other modest upgrades to its 'multimedia' full-frame mirrorless offering. We got our hands on one and have some preliminary samples to share – take a look.

The Nik Collection 3 by DxO has been updated to version 3.3, adding 25 new presets to celebrate the company's 25th anniversary.

The Voigtlander 29mm F0.8 Aspherical lens for Micro Four Thirds (MFT) systems will become the fastest commercially-available lens on the market when orders start in December.

The EF-GFX Smart Expander makes it possible to use nearly any EF lens — even third-party lenses — to work with Fujifilm's GFX mirrorless cameras.

The Tamron 70-300mm F4.5.6-3 Di III RXD for E-mount provides similar coverage to Sony's own 70-300mm lens, but at a fraction of the price. Is this another winner from Tamron? Watch our review to learn more.

70-300mm zooms are incredibly popular, particularly for travel. How does Tamron's newest model compare? Check out our sample gallery to judge sharpness, bokeh and pincushion distortion for yourself.

Adobe has released a new Photoshop (Beta) version for Apple Silicon and Windows ARM. The beta currently lacks many features, but it represents an important first step in Adobe's promised development of native software for the Microsoft Surface Pro X and the new M1-powered Macs.

Nov 17, 2020140
Tips or suggestions? Contact us!
More articles »
www.dpreview.com
Follow us
Mobile site
About
Editorial content
Cameras & Lenses
Community
All content, design, and layout are Copyright © 1998 - 2020 Digital Photography Review All Rights Reserved.
Reproduction in whole or part in any form or medium without specific written permission is prohibited.