Announced in August 2004, the PowerShot A95 replaces the hugely popular A80 at the top of Canon's entry-level range. Although it shares many features with the A80, the new model sports several significant improvements (including some also found on the A85), and in fact offers a feature set that compares well with considerably more expensive models, such as last year's PowerShot G5. The main changes are the sensor resolution (5MP) and a larger (1.8 inch) and considerably higher resolution (118,000 pixel) swing out LCD screen. Other improvements include an enhanced movie mode and a wider assortment of subject-based shooting modes. Let's have a quick look at the main selling points:

Canon PowerShot A95 vs A80 (differences)

* Supplied accessories may differ in each country or area 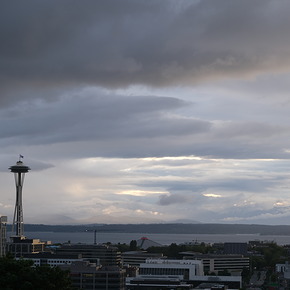 Sony ZV-1 hands-on preview: Six things you might have missed

Check out our first sample gallery from the Sony ZV-1, shot by our team at DPReview TV. Their full review of the ZV-1 is coming to a YouTube channel near you soon!

DJI's Mavic Air 2 shoots 8K Hyperlapse – but will you be able to view it?

A few sophisticated features were touted with the release of DJI's latest consumer-grade drone, the Mavic Air 2, including the ability to shoot 8K Hyperlapse video. But you may encounter problems trying to watch that footage on your computer.

A month after releasing the EOS Webcam Utility Beta for Windows, Canon has announced it is now available to download for macOS.

Shutterstock announces new earnings structure and contributors are anything but happy

The new structure pays a percentage of the sale price based on the level the contributor is at—a level that's based on the number of sales made, with that count resetting on the first day of the year.

The Windows program works with nine of Fujifilm's X Series and GFX System medium format cameras and turns the video into a feed that can be used with video conferencing software.

Panasonic has announced the compact and versatile 20-60mm F3.5-5.6 lens for L-mount bodies.

Interview: Dirk Dallas of 'From Where I Drone' shares what it takes to create excellent photos

If you're into aerial photography, you've likely heard of From Where I Drone. Dirk Dallas talks to us about what makes an exceptional photo along with his new book, Eyes Over the World.

The E2-M4 features Raw video shooting (when attached to an external recorder), 13 stops of dynamic range and 4K 10-bit video at up to 160fps.

Hands-on with the Sony ZV-1

We got a chance to handle the Sony ZV-1 to take a look at its vlogger-focused features and see how it differs from the RX100-series compacts.

Sony just announced the ZV-1, a modified version of the RX100 series aimed specifically at vloggers. We take a look at six important features you may have missed from the announcement.

Sony has announced the ZV-1, which it calls a 'content creator' camera. It's essentially the hardware of an RX100 VA redesigned to make vlogging and facing-the-camera shooting easier.

The lenses feature the same optical design as their predecessors, but offer weather-sealing, an updated focus ring and 'de-click' mechanisms.

The one that got away: the gear we sold – and now regret letting go of

Misery loves company, so we're sharing stories of cameras and lenses we sold and now regret letting go of – and inviting you to do the same.

We got our hands on Sony's new Xperia 1 Mark II smartphone which features impressive Eye AF tracking, super-fast burst shooting and a triple-camera array. Check out our initial samples.

The Xperia 1 II will be available to pre-order on June 1 for $1,200 with the first units set to ship out on July 24. If you get in early, Sony will even toss in an added bonus.

Casio: the innovator that time forgot

When most people think of Casio, the first things that pop into their minds are calculator watches and keyboards. But, as we explore in this article, the company was well ahead of its time creating features that are standard on modern cameras.

Unconventional and unsightly? Very much so. Effective? Most certainly. These six DIY smartphone rigs won't win any design awards, but they get the job done.

Title fight! In one corner we have the new Olympus E-M1 Mark III. In the other is the Panasonic G9 – two years old, but sporting an impressive mid-life firmware update. Find out who wins the battle for Micro Four Thirds supremacy!

OnePlus announced the 'Photochrom' filter mode will be 'temporarily disabled' via a software update that's due out in the coming week.

Canon AE-1: the gear that changed my (photographic) life, again and again

What makes the Canon AE-1 so special to Editor Dan Bracaglia is its ability to connect him back to the childhood curiosity and excitement that originally made him fall in love with photography.

There's more work to be done on our full review of the E-M1 III, but in the meantime you can now compare its studio test scene results with those of its peers.

Adorama’s opens up 'Perspective,' the first of its new photo contest series for US residents

The first contest in a new series from the camera store challenges U.S. photographers to come up with imaginative pictures on the theme of Perspective.

According to the ruling, the grandmother refused to take down images of at least one of the minors, even after requests from their mother to do so. As a result, the grandmother will be fined €50 for each day the images are still up.

Interview: photographer Cooper Neill on what it was like to shoot UFC 249 in an empty arena

Freelance photographer Cooper Neill took some time to share with us what it was like to be one of only four photographers to shoot the UFC 249 mixed martial arts event in an empty arena in Florida.

Vivo's new system stabilizes the entire camera module rather than just a lens element or the image sensor like on more conventional systems.

The SD Association has announced its SD Express 8.0 specification, poised to 'set a new standard for memory cards.' The SD8.0 spec utilizes the PCIe 4.0 standard and NVMe technology to deliver transfer speeds up to 4GB/s.

May 20, 202084
Tips or suggestions? Contact us!
More articles »
www.dpreview.com
Follow us
Mobile site
About
Editorial content
Cameras & Lenses
Community
All content, design, and layout are Copyright © 1998 - 2020 Digital Photography Review All Rights Reserved.
Reproduction in whole or part in any form or medium without specific written permission is prohibited.