The Panasonic DC-FZ1000 II is the sequel to one of our favorite enthusiast long zoom cameras. It has a 1" sensor and stabilized 25-400mm equiv. lens, and adds a touchscreen, additional physical controls and Bluetooth.
The FZ1000 II has a comfortable grip and twin control dials, but its all-plastic construction doesn't live up to its price. It's extensively customizable, with an array of physical and on-screen buttons that can be customized. The OLED EVF is very good and having a touchscreen greatly improves the handling of the camera.
Its versatile lens, snappy autofocus speeds, large EVF and 4K video capabilities should make it one of the better cameras in its class.
The autofocus system is quick to focus, with short acquisition times and solid accuracy. Its Depth from Defocus AF 'flutters' as the camera focuses, which can be visually distracting, especially when capturing video. It can shoot bursts at 7 fps with AF, and its 4K Photo mode gives 8MP stills from 30 fps video. Battery life is above average.
The FZ1000's image quality is good for its class, with noticeable improvements in color, skin tones and sharpening compared to its predecessor. The camera doesn't capture as much detail as the best of its peers and, if you're up to it, shooting Raw and post-processing will get the most out of the camera.
The FZ1000 II captures 4K UHD video at 30p and 24p, though there is a substantial crop which narrows your field of view (this is not an issue at 1080). Video quality on the original FZ1000 was impressive, though the autofocus system tends to 'hunt' for focus on occasion. The camera has a good set of video controls, the ability to use the touchscreen in order to keep your hands off of potentially noisy dials, and a mic input socket.
The FZ1000 was a solid camera and the improvements on its successor make it even better. While not best-in-class, its versatile lens, good image and video quality and reasonable price make the FZ1000 II well worth considering.

Over the course of finishing up our Panasonic FZ1000 II review, we took it out and about in Knoxville, Tennessee to see just what 400mm of (equivalent) zoom reach can do. 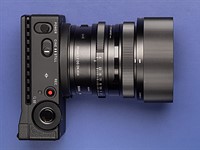