It's busy times for the Taiwanese manufacturer HTC. After launching the new flagship device One M9 at Mobile World Congress in Barcelona it announced the One M8s, an updated version of last year's One M8, a few weeks later. Today it introduced the One M9+ at an event in China.

The M9+ is essentially a supercharged version of the M9 and will, at least initially, only be available in China. The manufacturer says there are currently no plans to launch the device in Europe or North America but hasn't ruled it out either. At 5.2 inches the M9 Plus' screen is a touch larger than the display used in its sister device M9 and comes with a Quad-HD resolution instead of 1080p Full-HD. It also offers 3GB of RAM and an octa-core MediaTek MT6795T processor. A fingerprint scanner has been added for mobile payment functionality.

In the camera department the return of the Duo Cam system is somewhat of a surprise. The secondary camera for capturing depth information that is used to simulate a range of bokeh effects was first introduced on the 4MP One M8 but dropped on the M9, which comes with a conventional 20MP camera. The M9+ now combines the M9's 20MP sensor with the M8's Duo Cam features. Both models use the same ultrapixel front camera and have to make do without optical image stabilization.

On paper the HTC One M9+ currently looks like one of the most powerful devices out there and we'd be interested to see how the Duo Cam works in combination with a 20MP sensor. Let's hope HTC decides at some point to release the phone in Western markets as well.

The most expensive camera in the world 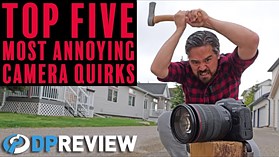 DPReview TV: Leica - the good and the bad

In our continuing series about each camera manufacturer's strengths and weakness, we turn our judgemental gaze to Leica. Cherished and derided in equal measure, what does Leica get right, and where can it improve?

Video: Fly around the inside of a dentist office with this one-take FPV drone video

A dental office, based in Germany, had a team of pilots create a mesmerizing FPV drone video to give prospective clients a behind-the-scenes look at the inner workings of their office.

Samsung has announced the ISOCELL HP3, a 200MP sensor with smaller pixels than Samsung's original HP1 sensor, resulting in an approximately 20 percent reduction in the size of the smartphone camera module.

Street photography enthusiast Rajat Srivastava was looking for a 75mm prime lens for his Leica M3. He found a rare SOM Berthiot cinema lens that had been converted from C mount to M mount, and after a day out shooting, Srivastava was hooked.

The lens comes in at an incredibly reasonable price point, complete with a stepping motor autofocus system and an onboard Micro USB port for updating firmware.

The new version of the Blackmagic Design Pocket Cinema Camera 6K brings it much closer to the 6K Pro model, with the same battery, EVF but a new rear screen. New firmware for the whole PPC series brings enhanced image stabilization for Resolve users

The OM System 12-40mm F2.8 PRO II is an updated version of one of our favorite Olympus zoom lenses. Check out this ensemble gallery from our team, stretching from Washington's North Cascades National Park to rural England, to see how it performs.

Ricoh’s new firmware for Pentax K-1, K-1 Mark II and K-3 Mark III adds season-specific presets, but only if you have the right lenses

Sony a7 IV earns our 'Best for stills and video' recommendation

For the next few weeks, you can see five planets in the sky at once

For the next several weeks, many observers will be able to see Mercury, Venus, Mars, Jupiter and Saturn in the predawn sky with the naked eye. Of course, a camera with a telephoto lens or telescope attached will get you an even closer look.

Do you want to give macro photography a try but don't want to spend a lot of money? If you've got a 3D printer and $20, you're in luck.

Video: The history of Zeiss, from the microscope to the moon landing

YouTube channel DW Documentary has shared an overview of Zeiss, highlighting the 175-year history of the optics company founded by Carl Zeiss in 1846.

The June 2022 Premiere Pro update adds a collection of new and improved features and performance upgrades, including a new Vertical Video workspace, improved H.264/HEVC encoding on Apple silicon and more.

Prior to its official launch, Chris was able to test Nikon's new Z-Mount 400mm F4.5 telephoto lens at a wolf sanctuary.

The lens adapter should work with manual and autofocus lenses of all kinds to turn 16:9 video into 2:35:1 when desqueezed.

Researchers at NVIDIA have created a new inverse rendering pipeline, 3D MoMa. It turns a series of images of a 2D object into a 3D object built upon a triangular mesh, allowing it to be used with a wide range of modeling tools and engines.

Light Lens Lab is a rather obscure optics company, but their manual lenses for Leica M-mount camera systems tend to offer a unique aesthetic at what usually ends up being reasonable price points.

We've updated our 'around $2000' buying guide, to include cameras such as the Sony a7 IV and OM System OM-1. We've concluded that the Sony does enough to edge-out our previous pick, the Canon EOS R6.

This compact shotgun microphone will convert the analog audio signal to digital internally before sending it as a digital signal to compatible MI Shoe cameras, such as the ZV-E10 and a7C.

In addition to the Amber and Blue versions, which give flares and highlights warm and cool tones, respectively, the new Silver Nanomorph option offers a more neutral flare that changes with the color temperature of the lights being used.

Slideshow: These are just some of the finalists for the Bird Photographer of the Year 2022 competition

The organizers of the Bird Photographer of the Year competition have revealed the top finalists, showcasing the incredible photography of avian photographers from around the globe.

While in Germany covering the Leica camera auction, Chris decided to mix it up and shoot some film with a Leica M6. Check out the hi-res scans!

DPReview TV: The most expensive camera in the world

A very special Leica camera just became the most expensive ever sold. Chris and Jordan were in Germany for the auction, and to tell you why this particular camera is so special.

As part of any mission to Mars, there will be garbage and discarded components. The Perseverance rover recently spotted a piece of trash, a bit of shiny thermal blanket. It's believed to be from Perseverance's landing operation, but it's not clear how it ended up where it did on the red planet.

The film stock is made in America and is being hand-spooled by film manufacturer Santa 1000 in Finland.

The Atoll tripod collar is a new accessory that lets you to easily adjust the camera angle on a tripod, regardless of the lens you're using.

Jun 16, 202264
Tips or suggestions? Contact us!
More articles »
www.dpreview.com
Follow us
Mobile site
About
Editorial content
Cameras & Lenses
Community
All content, design, and layout are Copyright © 1998–2022 Digital Photography Review All Rights Reserved.
Reproduction in whole or part in any form or medium without specific written permission is prohibited.