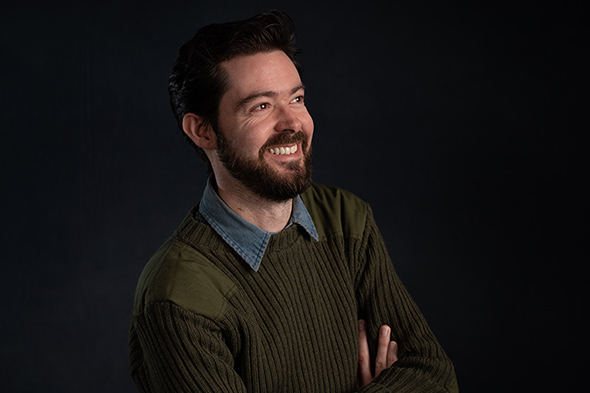 I'm in charge of the editorial content of dpreview. I joined DPReview when it was based in London in November 2009, after several years as a print journalist in the UK specialist photographic press. I moved from London to Seattle, USA, a year later and I've been here ever since.

This is the latest in our series of new 'Quick Reviews.' We will be using this format for cameras that are operationally similar and identical in terms of output to models we've already reviewed. We test to confirm the image quality is identical, then concentrate the review on the differences between the two cameras. To learn everything about the camera you are interested in we recommend reading not only the Quick Review but also the full review of the camera that it replaces - in this case the Sony Alpha 380.

Just posted: our review of Adobe Lightroom 3. It's been more than three years since Adobe introduced the first version of Lightroom - its raw processing and workflow tool aimed specifically at photographers. In June 2010 the company released the third version which represented the biggest update the software has yet seen, including the incorporation of an entirely new raw processing engine. We've been using the latest version extensively and have prepared a eight-page review assessing its usefulness as a tool for photographers. We've also looked at its relationship with the rest of the Photoshop family and, most importantly, how its output compares to that of its rivals.

The so-called 'Travel Zoom' category hasn't been around long - in fact the first camera that could really lay claim to the label was the Panasonic TZ1, released in 2006. The idea of a wide zoom lens in a genuinely compact form factor (as opposed to a 'bridge' or DSLR type) has obvious mass appeal, and as a result, all of the major camera manufacturers (and a couple of the minor ones too) have been pulling out all the stops in an effort to cater for this demand.

Just Posted: Our in-depth review of the Canon Rebel T2i/EOS 550D. The EOS 550D combines high-end features adopted from the 7D, with the low-cost, user-friendly ergonomics of previous entry-level models like the EOS 500D. On paper its the most compelling Rebel-series DSLR to date, so can it span the bridge between first-time DSLR buyers and more experienced users? Read our full test to find out.

The Canon EOS 550D is a difficult product to categorize. Ostensibly designed to appeal to first-time DSLR buyers and enthusiasts, it offers a lot more technology, and at a higher price, than we might expect for a camera aimed squarely at this sector. Although it might seem logical for the 550D to replace the EOS 500D, the older camera is set to continue in Canon's lineup, which leaves the 550D pinched between its entry-level (represented by the still-current EOS 1000D and the 500D) and nominally enthusiast (the EOS 50D) peers. Confusingly however, apart from build quality (which is all but identical to the EOS 500D), the 550D has more in common with the prosumer EOS 7D, and - perhaps even more confusingly - it out-specifies the EOS 50D in many areas.

Just posted! Our in-depth review of the Nikon D3S. The successor to the highly regarded D3 offers improved high ISO performance and a new HD video mode. Can these additions, plus a host of more minor refinements combine to keep the D3S competitive against newcomers such as Canon's EOS-1D Mark IV? Read our 34-page in-depth review to find out.

When the Nikon D3 was launched in August 2007, it had an immediate impact on the DSLR market, and not only in the professional sector. The D3 was Nikon's first DSLR with an FX (full frame) CMOS sensor, but its major selling point, in the minds of many photographers at the time, was its unparalleled image quality at high ISO settings. With the D3, photographers could shoot at ISO settings up to 6400 without a significant penalty in noise, and in a pinch, even go up to ISO 25,600 (equivalent) - unheard of at the time. This versatility, coupled with a very capable AF system and rugged, weatherproof build, did much to reverse Nikon's declining fortunes in the professional DSLR market. Professional Canon users, many of whom were disillusioned by the seemingly endless problems that plagued the flagship EOS 1D Mark III at the time, flocked to the D3 in large numbers. In the process, Nikon mounted a formidable challenge to Canon in the sports and action segment of the pro marketplace.

Just posted! Our in-depth review of the Nikon D3000, which replaces the popular D60 as Nikon's latest entry-level DSLR. A new guide mode and revamped AF system make the D3000 a compelling upgrade for D60 and D40X users, but the lack of a Live View function will not go unnoticed in the feature-hungry entry-level sector. Does the D3000 have what it takes to become king of the beginners' DSLRs? Click to read our in-depth 27 page review.

There is a temptation amongst those of us that shoot with and test DSLRs for a living to be more than a little dismissive about entry-level cameras like the Nikon D3000. However, first-time DSLR buyers are enormously important to camera manufacturers, and the competition amongst them for a share of the entry-level market is intense. The D60, which is replaced by the D3000, was Nikon's best-selling DLSR, and it is the success of products like this that drives the development of everything from low-end Coolpix models to the recently announced professional level D3s. But the success of entry-level DSLRs isn't just good news for camera manufacturers - today's 'low end' offerings are highly specified, powerful tools, which - had they been released a few years ago - would have commanded much higher prices than they do today. With the 6 million pixel D40, released in 2006, Nikon made a decision to create a completely different type of DSLR to its previous low-end offerings. The D40, and the D40x and D60 that followed it, was designed specifically to be user-friendly, as well as merely wallet-friendly. Gone were the 'traditional' top-plate mounted LCD screen and many of the external control points, in favor of a stripped-down, minimalist design and a largely screen-driven interface. The D3000 continues in this mold, but if anything, is even easier to get to grips with thanks to the introduction of a new 'guide' mode. The D3000 shares the same 10 million pixel CCD sensor as the D60, and almost exactly the same body and design, but this camera is more than a cosmetic revamp of the older model. Crucially, the D60's adequate but uninspiring 3-point AF system is gone, replaced by the same 11-point system as found in the D90. This venerable AF module (the Multi-cam 1000, if you were curious) has impressive provenance, and was originally developed for the professional-level Nikon D200. Some photographers may be disappointed, however, by the lack of live view and video modes in the D3000, which makes it the 'odd one out' compared to many of its entry-level peers.
@dpreview
Tweets by @dpreview
Latest reviews
See all reviews »
Finished challenges
Discover more challenges »
Most popular cameras
Sony ZV-E104.5%Zeiss ZX14.3%Fujifilm X-T41.5%Canon EOS RP1.3%Sony a61001.3%Canon EOS R51.3%Nikon D35001.3%Canon EOS M50 Mark II (EOS Kiss M2)1.3%Canon EOS R61.2%Sony Cyber-shot DSC-RX100 VII1.2%
Popular interchangable lens cameras »
Popular compact cameras »
Features