Welcome to another monthly thread! Feel free to share your work either here or through individual threads on the forum, whatever you are more comfortable with.

The rules are simple:

The title of the thread shouldn't discourage you from posting older pictures. Feel free to post anything that you found again in your archives or that you are currently working on.

Based on other user experiences, the V2 is better than the V3 at tracking birds in flight.  I enjoy mine with the 70–300 DX Ap-F.  For still birding, nothing beats my J5 with the 500 PF on a gimbal.

Thank you to Holgerlinke for starting this thread.

Here are a couple of my most-recent Nikon 1 photos taken that are not about birds. Not masterpieces, but snaps of what I saw on a short trip to an island I had never been on before.

Both were taken with my V2 and old 10-30mm kit lens with VR that no longer seems to function. I got a sharp copy of that lens.

View from the Campbell River ferry terminal overlooking a marina and Quadra Island in the background.

From a recent trip to Italy - the small, unobstrusive equipment was key in the crowded areas; it consisted of the J5 with the 6.7~13 and 10~100 non-PD zooms, and the Fuji X100F for low-light shooting.

Spring has sprung, and the tiny coriander flowers are being pollinated by these hardworking little guys. 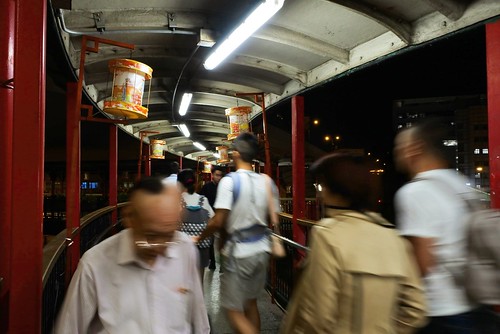 BTW, I visited the Vatican many years ago, and I don't remember that stair. Time to go back...

Thank you for keeping these threads alive.

Nice shot (albeit a bit small) Well done. Where is it?

Great picture - reminds me of a snail shell.  I echo the usefulness if the J5, particularly with the 6.7-13 - very good for interiors or out of bright sunlight.

I wanted a time exposure like photo of the falls but did not have a neutral density filter or tripod. Instead, I shot a 60 exposure burst using the 60 fps mode at 1/640 sec per exposure. The RAW images were processed in Capture One, and then combined in a "stack" of 60 images using Affinity Photo to create the time exposure effect of a 60/640 or about 1/10th of a second.

This photo was taken today, November 9.

I went to on a trip to Slovenia, and went on hike near the Triglav, throught the Mostnica Gorge. The day was cloudy, but the forest had nice colors.

The sky from our back deck just after sunset this evening.

Theres so much I want to see there!

I was so close with the 30-110 at full magnification, and snapped this right before he jumped onto the lens.

The big round diffuser gives a pretty good reflection on the eyes, like a cartoon character.

A friend just handed me a box of “old” Nikon stuff they had lying around. Their son was briefly into it, but apparently spent big because damn!

The rear cap was on that 105 macro, i just unmounted it from my V2 for the photo.

So i scored an AFS 105 macro 2.8, which is quite a lump of lens when mounted on an FT1! From what I’ve seen so far, there isn’t a huge gain in picture quality over the venerable 30-110 with extension tubes, and it is SIGNIFICANTLY harder to use one-handed! It does work from infinity to 1:1 which is nice, but it’s big!

I also scored a 1.7x teleconverter, but that doesn’t work with my 70-300 due to an odd clearance design. I might find a use for it. I also scored up a SB700 and SB800, which gives me a few more options for remote flashes on top of what i have.

Some moss waiting for rain, nestled in the mortar between two bricks.

If i pick up a magic arm to hold my big flash i can use the camera two-handed which will help out a lot with holding this lens. The larger working distance is a nice improvement over the 30-110, and the glass should produce better contrast.

Edit: Oh my god, i just threw the extension tubes on the 105 and it's ridiculous! I'll have to measure the magnification ratio tomorrow when i have more light, but it's amazing.

Living for the time being in a hot climate makes the local birds very different from old cold Sweden, where I normally live.

Here are some from the last few days:

A zebra dove, a tiny bird fairly usual around here!

This is a Paddy-field Pipit, who seems to prefer the grass lawns.

Same lawn, where you'll see hoopoes if you're lucky!

tordseriksson (at) gmail.....
Owner of a handful of Nikon cameras. And a few lenses.

Green bee-eaters are quite common around here, but getting this close is unusual!

No crop! Slightly adjusted exposure, do to heavily overcast weather here this morning.

tordseriksson (at) gmail.....
Owner of a handful of Nikon cameras. And a few lenses.

What's that Noise?Shedding some light on the sources of noise
www.dpreview.com
Follow us
Mobile site
About
Editorial content
Cameras & Lenses
Community
All content, design, and layout are Copyright © 1998–2022 Digital Photography Review All Rights Reserved.
Reproduction in whole or part in any form or medium without specific written permission is prohibited.