I purchased my Z7 with the kit Z 24-70 f/4 S primarily for travel, and it has not disappointed. So I wanted to do a short review for those who might also be considering this camera for travel.

Size and weight. Nikon clearly took a different approach from Canon wrt its first mirrorless lens offerings. While Canon chose to go with what I would call more typical DSLR-size lenses, Nikon chose a different approach--slightly slower but very high quality lenses that deliver outstanding IQ at a reduced size and weight. And, indeed, this had a lot to do with my decision to go with the Z7 over the R, despite the fact that I've been a Canon shooter for years and currently own a number of EF lenses. The combined size and weight of my Z7 camera/lens combo is dramatically reduced from that of my prior travel kit--Canon 5DIV and EF 24-70 f/2.8L II. And much appreciated.

Image quality. Reduced size and weight was not my only reason for going with the Z7, though. I also saw the Z7 as providing a substantial IQ boost. Both more resolution and greater dynamic range. And it's delivering. The quality of the images the camera has produced has been as good or better than I'd hoped. Reduced size and weight, together with better IQ. What more could you ask for?

As for banding, so far, I haven't seen any. I really think it's essentially a non-issue except in very rare cases, and even then, it appears that Raw Therapee has an available fix.

Thames from the London Eye

Handling and Ergonomics. Coming from Canon, I'm used to good handling and ergonomics. But I was somewhat disappointed by the R's control layout and build quality--another reason for going with the Z7. My transition to the Z7 has been very easy and intuitive. Really pleased with how this camera operates and feels in the hand. It's a joy to shoot.

Continuous Autofocus/Subject Tracking--the elephant in the room. Well, not such an elephant in my case. Fact is, I've never really trusted any camera's subject tracking to get my shots. I'd much rather rely on my own ability to keep the AF point over the subject. This approach has always worked pretty well for me, and continues to do so with the Z7.

Just for fun, while walking down the Champs-Élysées in the evening, I decided to do some experimentation. Using single point continuous AF, I tried shooting some motorcyclists and a bicyclist as they traveled toward me. Although my hit rate wasn't 100%, it was probably around 60%-70%--much better than the reviews had led me to expect. So while I don't believe the Z7's continuous AF is likely class leading, it is quite useable.

Bicyclist on the Champs-Élysées, Paris

Static Subject Autofocus. Fast and accurate. No complaints. Some folks have reported a fall off in speed and/or accuracy in low light, but I haven't really noticed this.

Conclusion. So, overall, I'm very happy with my decision to buy the Z7 and kit lens. Only real niggle is that I suspect that Nikon can tweak some more performance out of the AF system with future firmware upgrades. I believe the Z7 has the potential to be an even better performer, and I'd hate to see that potential go unrealized.

Grandson in the Louvre, Paris 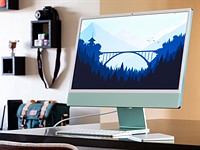