I'm wondering if anyone else has had this. My new RX100 IV depletes its battery down to zero when it's switched off. From googling I'm aware that the mkI had similar issues but not heard of anything similar for the mkIV.

I've tried several batteries (I have 4, 2 OEM and 2 third party) with the same results. I've also tried charging via USB to the camera and charging the batteries on an external charger. Same result.

The battery drains out over about 6-8 hours while the camera is definitely switched off, which is obviously wrong. I have a RX100 Mk2 which keeps it's battery for weeks with no issues. Same battery dies in the IV but is happy in the II.

I've removed the memory card to see if that had an impact, but the battery still drains out. Testing the voltage of a drained battery, there's 3.5v in there when the camera reports "battery exhausted" versus 4.2v in one fresh off the charger. The same batteries work fine and don't get drained out in the Mk2 I have.

I should add that the camera is sitting on a desk when I've been doing these drainage tests, not in a pocket or case where a button could be inadvertently pressed.

I'm going to send it back to Sony (cant take it back to the retailer as I bought it while on hols in the USA) but before I do though, I've decided to do a bit of investigation myself.

The first test I did was very interesting. There's clearly something going on while the camera is switched off. I'll need to do a control test with the same battery on my mkII to eliminate any impact from the data logger that is doing the measuring. 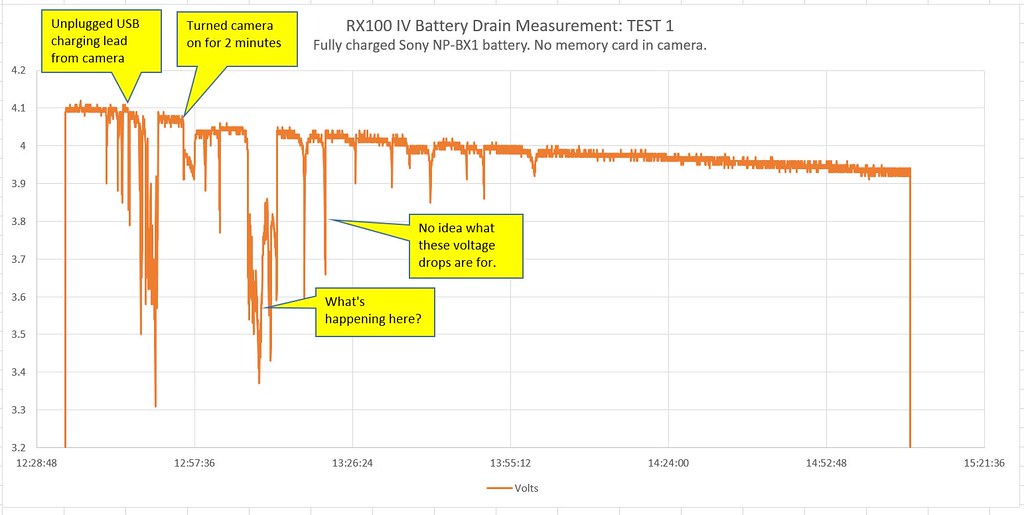 Sony RX100 Sony RX100 IV
If you believe there are incorrect tags, please send us this post using our feedback form.
Reply to thread   Reply with quote   Complain
KBKB • Senior Member • Posts: 2,909
Re: RX100 IV depletes battery overnight when off.
In reply to Tobers • Nov 11, 2015

You might also try rerunning the test with the camera in airplane mode to see if this makes a difference.

You might also try rerunning the test with the camera in airplane mode to see if this makes a difference.

Indeed, well spotted. I forgot to mention that the camera is already in airplane mode for these tests.

Overnight test with 4 manually triggered (i.e. by me pressing the power button) power on events.

Detail of one of the power-on events, also showing constantly varying voltage.

OK, so it's not the most exciting thread in the world but I hope it's useful for others. Here's a comparison of my RX100II versus my faulty RX100IV using the same battery. Timescale is about 10 hours. Pretty conclusive.

OK, so it's not the most exciting thread in the world but I hope it's useful for others. Here's a comparison of my RX100II versus my faulty RX100IV using the same battery. Timescale is about 10 hours. Pretty conclusive.

What an interesting topic while I am mostly focussed on the power capacity (after getting rid of my Canon S120 after being a power hungry camera).

Have you tried the camera off while viewfinder is left upside (so you can also check the viewfinder from time to time)?

Yes, I had the same thought i.e. that it could be the viewfinder turning on while retracted.

I did leave the camera off with the viewfinder up and extended, and the little screen inside visible in my eyeline while I worked at my desk for several hours. It didn't spring into life at any point.

I suspect it's something as simple as a loose connection in the battery circuit somewhere.

Probably RX100 MKIV is also suffering from a poor battery contact or something else. See below:

I have an eye on this camera and most probably will upgrade (but I don't want to face with the same issue as my S120 did as explained in the link).

If you can replace it under warranty, do it. Sony mostly replaces such stuff when there is a problem but it takes some time (My PS Vita had been replaced after 3 weeks after getting instantly dead; after that moment I didn't buy any Sony abroad for not getting suffered for the warranty issues).

Sony are replacing the main board. Will report back with progress.

Really got amazed. Normally they swap the unit. In anyway good for you as they accepted the problem. Keep postşng the result.

I'm wondering if anyone else has had this. My new RX100 IV depletes its battery down to zero when it's switched off. From googling I'm aware that the mkI had similar issues but not heard of anything similar for the mkIV.

Doesn't sound right. In addition I don't know where you got the information about the RX100 I battery draining when not in use because because it's not true. My RX100 doesn't do that. In fact I can go for days or even weeks between use with no battery drain.

Excitingly I have just got my RX100IV back from Sony UK after they replaced the main circuit board. I'm delighted to have it back, but it has taken some time to get it fixed (like a month, with many escalations).

Anyway, hopefully it is fixed. Tonight will tell and we'll see if the fix has done the job.

Very good for you! Keep reporting if it has changed the battery draining behaviour while sleeping or not?

4 weeks is as I had similar experience with my PS Vita and as I told you. However they had replaced it with a brand new PS Vita.

I guess they are having many similar issues and starting replacing PCB's only. This may be a chronic problem in RX100 IV.

very good for you. Now it is time to take enormous amount of photos and videos with that pocket giant.

I guess I will wait for a while for this model as Ver1.0 may have some bug/production failure inside so they fixed it with a new PCB in your case (you are lucky that you will use a unit which is serviced). Just imagine many average people charging their batteries overnight before usage!

IMHO, they just make anyone wait for a while to avoid every tiny problem to come under warranty (My brand new PS Vita was replaced with a new one in 3 weeks; just consider a new console was waited for 3 weeks; that was 5 years ago. I almost gone crazy!).

As an engineer, I think, sh*t always happens at anything (smartphones, cameras, cars, surgeries, etc.). Because, humans make those things and every human has great potential to cause loads of mistakes! As much as it can be fixed, it is OK. Have a nice Xmas!

I still own the I and picked up the IV three months ago and neither drains.

Good luck with your camera!

Could you please describe your experience? I'm interested in knowing how they messed up their after-sale service.

Could you please describe your experience? I'm interested in knowing how they messed up their after-sale service.

Yep - I sent it to Sony UK's repair centre in Wales, with the original receipt and a description of the problem. Due to me having bought it in the USA while on holiday in Vegas, they refused to do a warranty repair. While I know they want to stop grey imports, I'm a legitimate customer who bought from a premier Sony dealer in a face to face transaction.

They insisted I needed a "Tourist Warranty" in order to get the repair done under warranty, but were unable to tell me how to get one. The dealer in Vegas had no idea what a Tourist Warranty was, which is probably why they didn't offer me one. So I was stuck in a position where Sony needed something which was unobtainable from their dealer - rather crazy. I escalated many times and got fobbed off, given inaccurate information, and basically stonewalled. Very poor indeed. If you're going to insist on people having a Tourist Warranty, at lest tell us how to get one!

It also transpired that the spare part they needed to fix my camera was not available - it needed a new main circuit board. This took about 5 weeks and calls on an almost daily basis to get some action.

All in all, their customer service was appalling.

Cheers. Appalling customer service indeed, I think beyond the local issue there's a problem with the company culture.