Thanks, Don. One of my concerns has been the weight and size of the camera. I want something that I can fit into a carry-on for plane travel (certainly don't want to check a $1,500+ camera in my luggage) without cause the carry-on bag to be too heavy or bulky. I also want something that will be easy to carry all day long and on long walks. With that in mind, how have you found the RX10 iv's size and weight?

I looked into M4/3, but to get a good one with a decent long lens, the cost was getting up there and so was the weight.  I would also have to by a couple of shorter FL lenses.

Someone mentioned the RX10 and other bridge cameras.  I tried the Nikon 950 but the ergomonics and IQ, especially noise, rule it out.  A local camera shop finally got the RX10 in after six weeks of waiting and they let me use it for two days.  I found the IQ was better than my Canon ASPC, I could crop more, it focused faster and had 25% more reach.  It also weighed 25% less than my Canon with any lens but the plastic 50mm, and 25% less than the 70-300 DO.  I was sold.

Still learning with it and still waiting to travel. 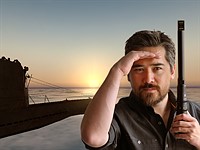