The silence of the lamp 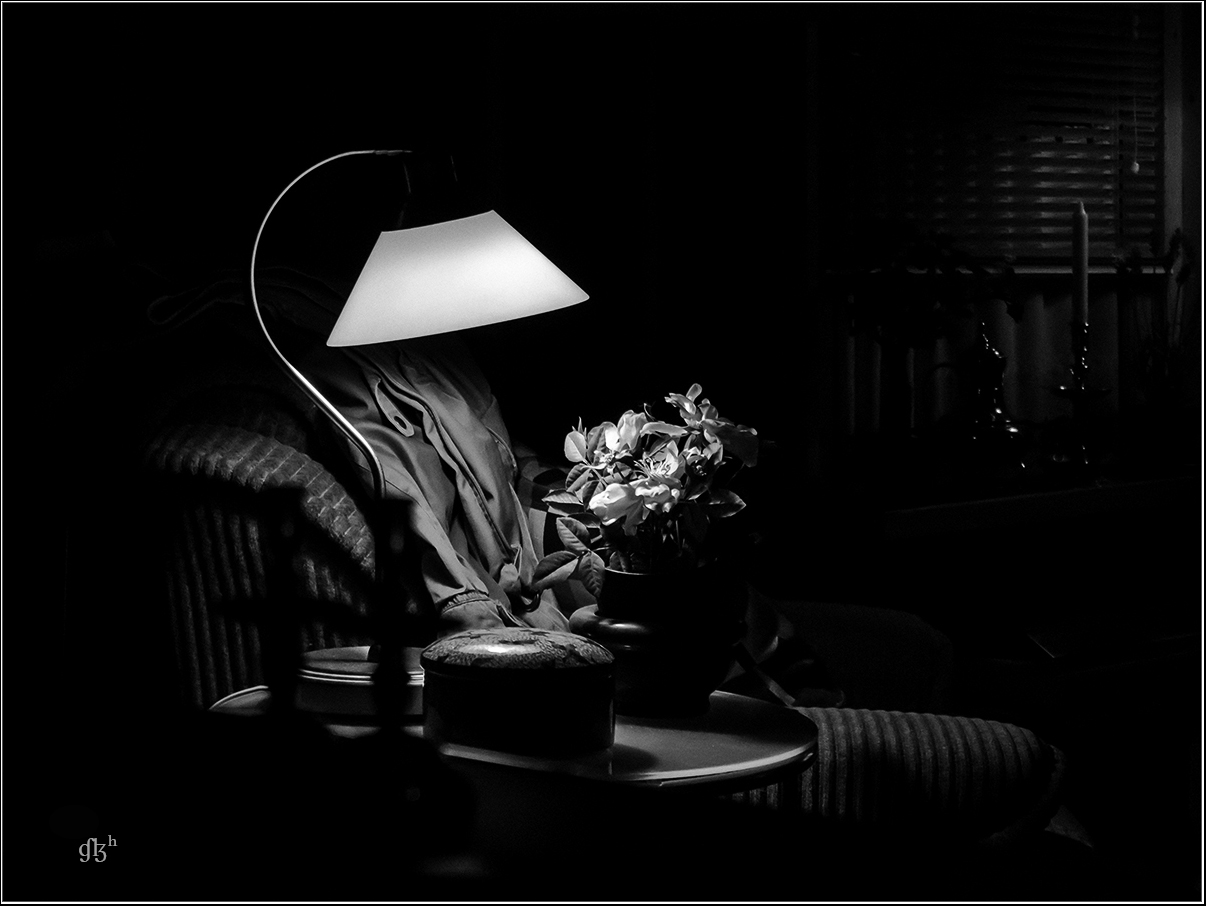 When you began to set this up Lou, did you have your title in mind and deliberately played on our prior knowledge? Or did you set it all up and then the title came to you?

The curve of the lamp kneck and the lamp itself have created a person and a reminder that the usual inhabitant of the coat is missing. Should the coat owner be within, his/her hand might be holding those flowers. There is a suggestion of funerals. What is in the round box on the table? It has to be a critical clue.

A carefully balanced exposure. Lots of black spaces for things to be hiding in, areas where we can peer and barely make out a little detail, a beautifully exposed lamp that gives the highlight without losing detail. A note of appreciation for the repetition of parallel lines in the upholstery and venetian blinds.

Whodunnit publishers would snap up this image.

Mike first of all, this is not a setup and the name is a parody of course.

And In case of the round box, that is a piece of Chinese porcelain sometimes filled with some sweets. Once received from my sister for my wedding day that I once had in a gray past after that only girlfriends which is much more exciting

What do you mean with "Whodunnit publishers" would snap up this image?

I'll go out on a limb because Mike might not return to the thread.

I believe that Mike wanted to say that publishers of mystery novels would welcome your image for a cover.

("whodunnit" is a common phrase to indicate thrillers in which the reader, or viewer for movies, needs to unravel the murder mystery together with the detective - as opposed to novels in which the criminal is our antihero and we know from the start who did it...)

I understand and I should have known it. Thank Roel, for your explanation.

What's that Noise?Shedding some light on the sources of noise
Top threads in this forum
Most bookmarked in this forum
www.dpreview.com
Follow us
Mobile site
About
Editorial content
Cameras & Lenses
Community
All content, design, and layout are Copyright © 1998 - 2021 Digital Photography Review All Rights Reserved.
Reproduction in whole or part in any form or medium without specific written permission is prohibited.