For this image I can not pick Chris. The centre of the flower is not sharp and lacks detail in both versions. This could be a choice you made. It could also be an effect of the type of focus box used and its placement. I use a single focus box when stacking (and generally all my images) and place the focus point where I want the sharpest part of the image, lock the focus and recompose. When stacking it is a bit more complicated. In a stack of nine the camera's first image is made where the focus box is placed. The next two images are made in front of that focus placement and the remainder of the images are made behind the focus placement. The placement of the focus box becomes critical and for the best results you need a single point focus placement so that you can control its location. You also need to place it so that it is closer to the front of the image part you want in focus than to the back. The differential setting is also critical! If it is too much there will be soft bands in the image between the sharp areas. That may be what has happened here. I use a differential of three for almost all my stacking and for the most part only stack nine (I leave the camera set at raw so I get a raw and a jpg for each image of the stack so a stack of nine produces 19 images). For flowers I think that number works well enough. The camera adjusts the actual physical distance of the images based upon the differential setting taking into consideration the f/stop, the focal length used, and the distance the focus box is from the sensor. (Aren't the firmware writers clever!)

So, what settings did you use for the stack?

You can still get an out of focus background if desired when stacking but get detail in the flower area. The amount of background blur is less than what you would get without stacking but it may still work out ok if that is what you prefer.

Thank you kindly for very detailed explanation.  I will respond as  soon as feasible. 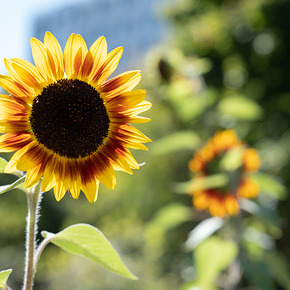