Lets look at the actual damage in actual photos caused by the RAW noise reduction performed at low ISO by the R5. It is huge and very obvious, to the point that the R5 clearly stands out from any other camera because when the shadows are pushed, lots of colors become totally wrong, even to a untrained eye. Specially reds and blues. While the previous Canons (not only the 5D4, even cameras from 10 years ago) keep the right colors. This is by far much more harmful that any potentially associated detail lost.

In the best exposed photo, the man at the left has red & blue coat: 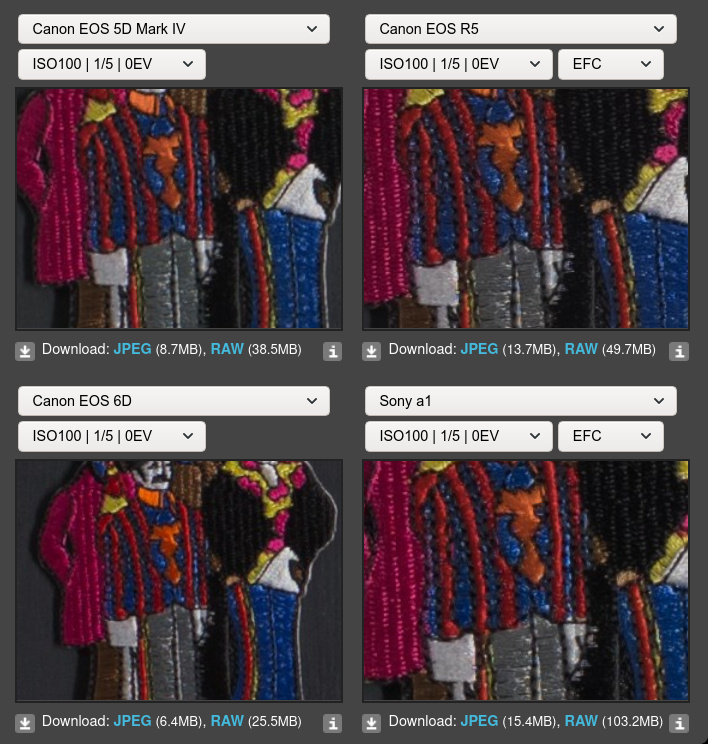 At +3EV the blue coat now has a strong magenta cast (only in the R5): 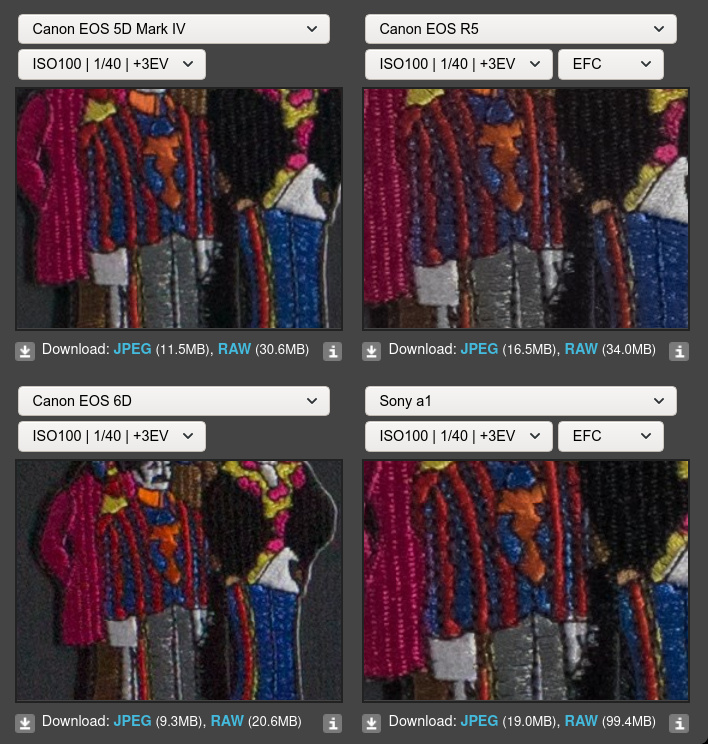 At +5EV the blue is totally replaced by magenta (only in the R5): 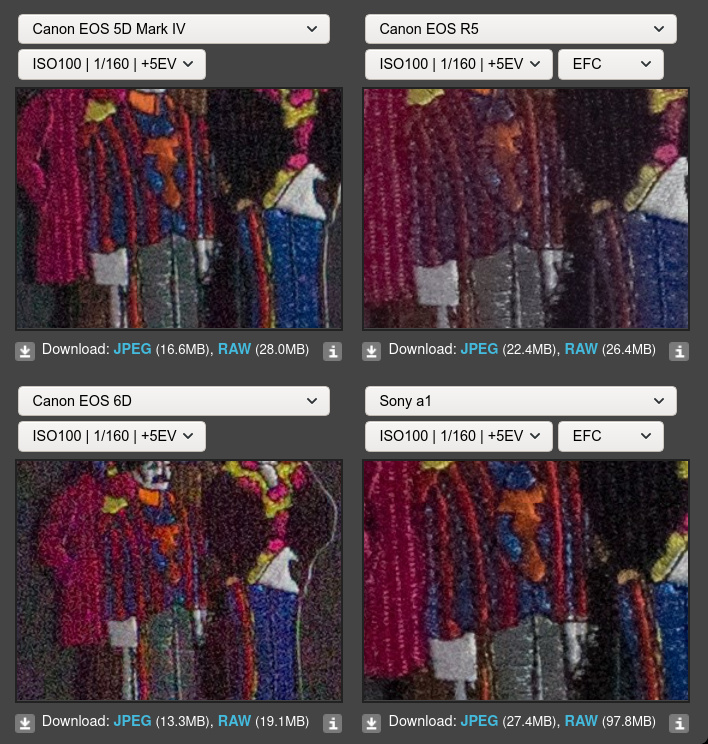 I won't inline more crops, but you can click on the links bellow to see by yourself.

In the beginning it there were reds at the center and at the right. When the push increases, the center reds become brown while the right ones still are red. For comparison, the 5D4 keeps the right colors everywhere. As well as the old 6D did.

Just the same broken colors at many other places (only in the R5, not in the other cameras).

The red spreads into the background and into the blue areas, but only in the R5.

Ok, what a smooth grey at the right... but the cheap noise reduction smears the blue rings into a mix of blue and pink (only in the R5).

You can change the cameras in the tool combo: not a single other camera from Canon or any other manufacturer has the wrong colors shown by the R5 in the lifted shadows.

Unfortunately, it seems that the second base ISO level (400) also has noise reduction, so there is no way to perform color-accurate work with this camera using the whole dynamic range available (increasing ISO totally recovers the colors, but decreases dynamic range). As a consolation, up until +3EV the noise reduction mostly causes a moderate color cast, to a degree depending on the surrounding subjects colors contaminating it. And in real life many times you won't have a second shot from another camera to compare, so the R5 false colors in the lifted shadows could remain at times unnoticied.

We suspect that Canon did this to simulate more dynamic range (the only way to explain why it is done only at low ISO). But the final result is less latitude for pushing the shadows, compared to e.g. the 5D4. In fact the R5 worsens every other Canon camera in the lifted shadows color fidelity, even the old 6D. We now have 0.66 EV of additional dynamic range compared to the 5D4, but kind of a unusable one: at least 3 EV have been lost if color fidelity matters. That is an unacceptable tradeoff. And what is the purpose of a camera other than reproduce the reality with fidelity?.

The 5D4 was already very close to Sony in dynamic range. Plenty acceptable. But Canon seems to have decided that the rest of the gap could be filled just by cheating consumers, no matter if this causes the sensor to go a step back in actual performance. Seriously Canon, do you think that nobody would notice it ever?. We should publicly and loudly censure this attitude. Yes Canon... we really don't care about you cheating us, but we care about image quality. Please, bring back the decision making to the engineers and lay off those all dumb marketing morons at your staff. Note that we the consumers are not dumb morons, at least in the long run.