Yes, the plan was to trade in for a used A77ii body. Though my A77’s current shutter count is 2103, and I haven’t been able to find a used A77ii body with less than 10k exposures. But I guess that’s to be expected.

And my budget is basically trading in or selling existing gear to get the A77ii. If I sold ALL my current gear I might be able to get an A7iii, but then that would maybe only get me a kit lens, and I’d be out of funds for anything else.

I’m now I’m trying to decide if it’s still worth it to “upgrade” to a used A77ii, or just keep my existing A77 and sell some of my current lenses to get another lens that I want. Man, these decisions are hard!

How much are you going to get from trading in your A77? My A77 was stolen a few months ago and I would be interested in purchasing another if I could swing the price on my meager photography budget.

Well, the online buying places are basically giving me chump change for it.  If I could sell the body, vertical grip and 16-50 SSM lens for $800 I’d go for it.  But anything less and it’s just not worth it to me.  It has a shutter count of less than 2,300, and all in mint condition. 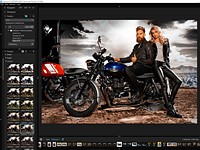