All good information from RDM5546.

One thing that seems to be true is that the new RF lenses, compared to the EF lenses seem to be designed depending on digital/profile correction. I suspect but have not proven yet, that the consumer lenses depend even more on correction.

Below is a comparison of the 20+-year-old Canon 17-40 f4 at 17mm and RF 24-240 both at their widest focal length and aperture AND in the far upper left corner of the pictures (the worst case for both lenses).  Looking at the uncorrected images, the chroma aberrations look about the same but the RF lens is highly distorted where there is more minor distortion on the old EF lens. After correction, the RF 24-240 has somewhat lower resolution in the fine detail, but much better contrast than the EF lens.

No amount of stopping down will improve the resolution loss caused by distortion (but a higher resolution camera might do better). BUT, unless you are "pixel peeping," you probably will not be able to tell the difference in most photos, because, with profile correction, Canon seems to be able to keep the contrast high and eliminate chroma aberration  (they seem to be totally gone with DPP4).

Essentially Canon appears to design new lenses and let parameters get worse IF they can be corrected digitally.

If you look carefully at the corrected images below, you can see that the 17-40 has finer detail but the 24-240 has much better contrast. In almost any real-world photo, the contrast advantage will be preferred. But if you look at the uncorrected images, you would probably pick the one from the older EF lens. 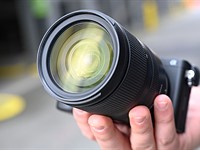