(Slight edit from a version in the Cloudy nights forum:)  Although I had not seen anyone presenting Mars captures with regular camera equipment beyond small dots, I set myself out for the challenge of doing this with what I had (mostly) now that it was at its closest, and trying to learn planet stacking.

I found that stacking a 1.4x TC and 2x TC gave the best results with my 300mm lenses. I used my Nikon 1 AW1 with the FT1 adapter for the recording, since it has about 2.8um pixel size, a fully electronic shutter, and is capable of up to 60 raw frames per second. I did however only use 15 frames per second for enough exposure at 1/60 sec at ISO 160. It was released in bursts of 29 frames filling the buffer with a home made pneumatic remote release. I had the rig set up on my SkyTracker to help following the planet, but only pointed the tracker in a very approximate direction of true north as Polaris was hidden by trees at my locations. With best practice it would take about 10 min to fill a 16GB card with 1580 raw files due to the time needed to clear the buffer. Images were centered and cropped in PIPP, then stacked in AutoStakkert with 3x drizzle, typically using 15-30% of ca 1000-1580 frames per take, sharped with wavelets Registax, edited for contrast and brightness, and then had final edits and resize applied in Nikon Capture NX2. For animated GIFs, they had another trip through PIPP after straightening to keep them centered. 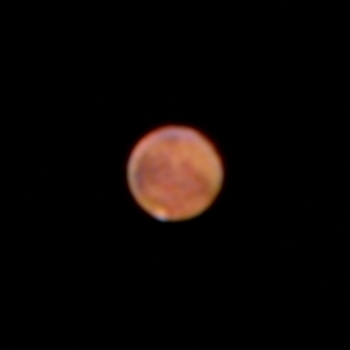 Much above my expectations and to my joy, I found that I could not only resolve some patterns on the planet, but also the south pole and something at the north pole that might have been ice or clouds. Then a few days later, October 9, a used TC-20E III that I had ordered for the occasion arrived. The TC-20EII was mounted closest to the Nikon 300mm f/4 PF which was stopped down 1/3 to 2/3 stop. The protruding front of the TC-14E fits nicely into the rear opening of the TC-20E III. 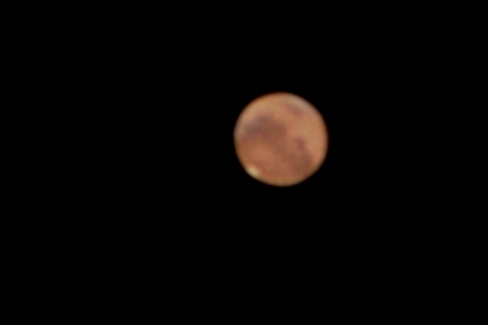 Here are the animated GIFs from the same sessions + one from October 14 near opposition when seeing was a bit worse:

(The October 9 GIF has one additional take that was stacked from 50% of only 29 frames and started >2.5 hours before the next one - it was supposed to only be a quick test before my tracker got occupied with a deep sky target but the result was good enough to include in the GIF).

I hope this can inspire others to try something similar while it is still time.