I have 5 solid months in and I figured I know sufficiently enough to write a review. While 8 months feels more like long-term review territory, I've also been using exclusively the V and just about daily so I have a good number of hours logged so far.

I had a lot of reservations about getting an X100 honestly because I really do love gear but lens GAS is absolutely vicious. But what I've learned shooting exclusively at a 35mm equivalent with the X100V is that the vast majority of my notions of gear limitations were imaginary. I don't know how else to put it.

My camera is "better" than I am - or rather, it has so much potential for me to milk that I feel like I've still only scratched the surface of what the X100V can do. This was true of my older bodies as well but never more so now. The "limitation" of a fixed 35mm equivalent is now a challenge to use the view in a way that plays to its strengths.

As a documentary photographer, I've always wondered why 35mm was considered a classic docu focal length. While I've always been a 50mm shooter, I craved something wider as many of my best images were often taken with a non-50mm. I was hesitant to go 35mm but after dipping my toe in with the XF 23mm, it really is an ideal wide-normal that I can use anywhere.

Best of all, the X100V uses a lens that's even better than my old XF 23mm f/2. The haze issue is actually not 100% fixed at f/2 close focus distances; it still crops up when shooting macro into backlighting. But it's still very well controlled and a non-issue otherwise. Sharpness is never an issue unless user error comes into play and the focus acquisition and tracking are snappy. The new lens does buzz a bit when focusing; I've heard the X100F is silent/quiet. But it's only an issue in silent environments; I can't recall ever being bothered by the lens chatter.

People keep going on and on about the heat - overheating is 2020's fixation I guess. I've shot with it in 90+F temperatures through multiple batteries doing docu work and it's never once overheated. The V gets a little warm around the grip but never hot. I don't shoot 4K video (or video at all, really), which is apparently when it can overheat. But if you do need a 10-minute continuous 4K clip, that's what the X-T/X-Pro line is for.

I struggled between choosing this and the much cheaper X100F, which has X-T2 guts so I knew I'd be satisfied with the output. But I really wanted the following:

- weather sealing like my X-T2 because I do get my gear wet
- the new JPEG adjustments (Clarity, Tone Curve, Color Chrome FX/Blue - I could write even more on just how delightful having the tonality enhancements of Color Chrome is)
- sharper lens

And what I discovered was that Classic Negative is absolutely delightful. Since I previously owned the X-T2, Classic Chrome and Acros were my most used Film Sims. Eterna has never excited me and most of the early reviews using Classic Neg didn't really suit my tastes. I figured it wouldn't see much use from me.

But now that I've had the chance to use it, I have to say it's incredibly flexible and I use it maybe 50% of the time, with Acros, Asia, & Classic Chrome occupying the other 1/2. What makes CNeg so great is that its character changes drastically depending on the scene. It also completely changes character with very slight exposure changes, especially the sky. I can imagine what I'll get with Classic Chrome but the world in Classic Neg is often a surprise yet is always pleasing. I have to make an effort not to use it all of the time. It has a similar "classic" vibe like C-Chrome but more punchy rather than desaturated. And just to highlight how flexible this FIlm Sim is, every image here except the last two are in CNeg.

The OVF was also something I never thought I'd use but after a night protest shoot I was reminded of how useful not relying on EVF output can be.

Lastly, the flash gains quite a bit of power thanks to the leaf shutter's faster sync speed. You can overpower daylight at f/2 with enough juice and with the 4-stop built-in ND filter get some fantastic portraits! The TTL metering is pretty intelligent and does a great job of providing tasteful fill light. I'm still new to flash use so I wish I had more to say on this topic. But I find that the built-in flash provides plenty of light for portraits like this one. 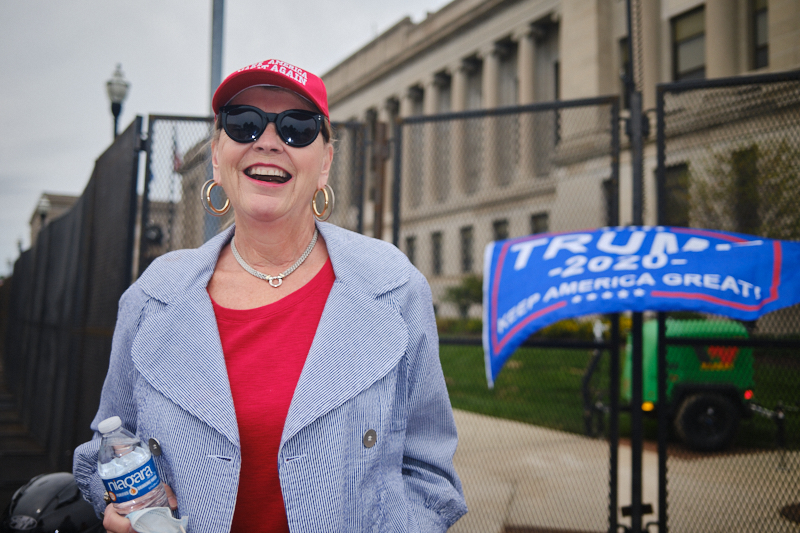 Having just sang the praises of a fixed lens compact...I'm debating breaking my 1 Camera 1 Lens streak. In a fit of GAS I snapped up a bargain TCL-X100 II and it's on the way. The 50mm is calling me home...

But I'm already starting to regret potentially ruining the compact ethos of a fixed lens camera. It might sit in my closet for 7 more months...Or I might even re-sell it because my photography really has blossomed since I started using the V. Without the distractions of "what focal length works best," I've learned to see in new ways and have come up with some of the most intense, impactful images of my photography career.

I could never have captured this with a 50mm because I was in a crowd and someone would have been in the way. And the size of the X100 series is an additional asset in this shooting environment. I'm really curious to see what else the V has to teach me...

The X100V enables my vision as no other camera has so far. It's insanely well thought out, it gets out of the way to let me capture my intention, it offers the features and professional-level quality of the X-Pro 3 with a lens that makes the most of it, yet is small enough to be an easy daily carry. It's not quite pocketable but it definitely is sling or pouch-able. The best camera is the one you have on hand and there's always space for the X100V.