IBIS Fractures ? Is that a thing ?

Started 3 months ago | Discussions thread
Antisthenes • Regular Member • Posts: 364
Not really an issue for most users, IMHO
In reply to Kumsa • 2 months ago
1

I love Roger Cicala's articles, but I often have to roll my eyes when he ponders some design aspect of a lens or camera. I definitely wouldn't hold that against him, because Roger's background is in medical science, and the fact that he's got no specialist knowledge in physics, optics, mechanical or electrical engineering or software design is quite understandable.

As a recent example, I skimmed through the teardown of a saltwater-damaged Fuji GFX100, and couldn't help notice a couple of amusing conjectures:

(b) that the springs attached to the IBIS mechanism might allow for some "vertical" movement, as this is a 5-axis IBIS system

Conjecture (a) makes one realize that Roger isn't familiar with, or hasn't internalized the fact that many interchangeable-lens digital cameras have dust shakers in front of the imaging sensor. The electrical conductor simply powers the thin piezoelectric ceramic vibrating strip attached to the first layer of glass.

Conjecture (b) makes one realize that Roger might be thinking that IBIS needs to tilt the sensor, which is absolutely false. Every camera shake motion compensated of a 5-axis IBIS is, ultimately, mapped to translation movements of the sensor, not to a tilt. Tilting the sensor relative to the lens' optical axis would cause a tilting of the plane of focus — as per Scheimpflug's principle — and possibly cause large areas of the picture to go out of focus.

To prevent the occurrence of any tilt, the sensor is supported by three tiny ceramic balls, kept sandwiched between the sensor plate and the base plate by multiple tensioning springs.

Let's also note that the "Halbach" magnet disposition above the IBIS electromagnetic coils can create only lateral Laplace forces — i.e. forces that are perpendicular to the plane of the solenoid. Therefore, the sensor plate can only "slide" in a parallel fashion relative to the base plate, the direction of that movement being regulated by the IBIS controller simply by changing the polarity of the current circulating in the coils.

In another teardown — of Nikon's latest 120-300mm lens — I seem to remember Roger conjectured that some unmarked, smallish and fairly thick rectangular component on the PCB of a function button (high-end telephoto lenses often have programmable buttons around the lens barrel) might be a memory device. The component doesn't look at all like an electronic chip — some people might need to be reminded that a memory device is an electronic chip, after all. I'm a bit amused that the width and layout of the electrical traces leading to that mysterious component, and the Nikon lens' functionalities, didn't immediately suggest to Roger that the component was a buzzer designed to produce the confirmation beeps the lens emits when the buttons are operated.

Basically, an inability to properly integrate into his thinking the facts that

making him unable to reach plausible engineering hypotheses (buzzer, instead of memory chip)

But, I repeat, I love Roger's articles, as they are quite unique on the Internet, nice to read and very informative, despite the occasional eye rolling and pinches of salt (not necessarily supplied by seawater) they might require.

Anyway, for the IBIS fracturing on Sony's cameras, I seem to remember Roger being surprised that a "cracked" frame didn't result in visible impact on a camera's imaging performance.

Roger seems to overlook the fact that the reference surface of an interchangeable-lens camera, for optical alignment purposes, is the lens mount. Everything — the flangeback distance, the tilt, the centering — derives from the "zero" point defined by the mounting flange on the camera body.

On mirrorless cameras, designers would thus ensure that a sensor — be it packaged in an IBIS block or not — is mounted as precisely as possible relative to the lens mount, using e.g. accurately shimming. The mount+sensor form a precisely adjusted, single block, "floating", in some sense, inside the camera's body — the outer shell.

That concept of "floating" inside the body might be difficult to mentally picture.
This visual example might give an idea of how a mechanical block requiring precise optical alignment is solidly attached to the reference mount surface, and "floats" inside the camera body: 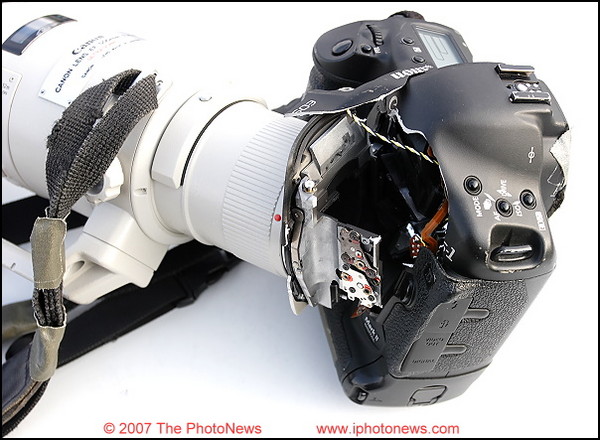 What I suspect Roger saw were cracks on the less critical, spacing attachments between the body shell and the "floating" mount+sensor assembly. Therefore, it's not surprising at all that even if the body shell becomes slightly ajar relative to the mount+sensor assembly, the critical optical parameters (distance/tilt/alignment) between the reference mount surface and the sensor — and therefore, the image quality / focusing performance etc. — aren't much affected.

What could cause such fracturing between the body and the mount+sensor block ?

Some Sony A7 models might have been rented by people who have Nikon or Canon SLRs, and who wanted to test how a FF mirrorless camera would perform with their SLR lenses using a mount adapter.

A risk there, for Nikon users, is that their muscle memory — developed over years of using Nikon cameras — might induce them to try to rotate their well-known Nikon lens in the familiar direction (which happens to be wrong from a Sony body perspective) when trying to unmount the lens.

As the lens wouldn't budge, such users might just try to apply additional force, still in the wrong rotational direction. The resulting torque and large torsional stress might rotate / bend the Sony A7's body shell relative to its mount+sensor block, and the spacers between the body shell and the mount+sensor block might thus get fractured.

The above is, of course, pure speculation of my part, only based on my observation of some long-time Nikon camera users, but I have no otherwise reasonable explanation about the origin of mechanical stresses sufficient to crack the (not that critical) supporting / spacer attachments between a body shell and a mount+sensor block.