Is The GX9 the Best Deal In Photography Right Now?

Started 7 months ago | Discussions thread
OP neverendinglight • Regular Member • Posts: 490
Re: Is The GX9 the Best Deal In Photography Right Now?
In reply to Cyvan • 7 months ago

Never had any problem with focus accuracy with the GX9 or any Panasonic camera for that matter. In fact I'd go far as to say that Panasonic (especially later models) have the best focus speed and accuracy out of any brand when using S-AF, I've used them all. It practically sees in the dark (it can focus through 10 stop ND filters), is instant and never misses. Your GX9 must have been faulty which is unfortunate.

Maybe, but let me clarify, its not that it missed 40% of shots or even 15%, I'd taken some amazing pictures with it; it's just that, having used nothing but Panasonic cameras since I got back into photography 4 years ago , I've gotten used to how they focus and I know the deliberate steps to take to make sure they grab focus. Most of my missed focus shots with my other cameras were in very challenging conditions (dark, backlit etc) and or quick snapshot opportunities where u just clicked quickly and hoped u caught it. So when I did miss I could usually figure out why. With the GX9 there were too many times where I took those deliberate steps and then I'd get home and find out the shot was still back focused.

I think part of the problem was that , with my other cameras, I could shoot with the EVF and , being immersed in the image, it was easier to tell if you really had focus. As I stated, for me, the GX9 EVF was useless in that regard so even when I did use it I couldn't be absolutely sure, it was only good for framing. Consequently I spent more time shooting with the LCD which is not bad, and still better than using that EVF but not up to the level of critical on-the-fly inspection that I'm used to having. For some candid moments you only get one chance.

It's very possible that someone who has no issue with the EVF at their preferred diopter setting would have greater success.

For me, there was just more 'friction' to the GX9 experience compared to my other cameras despite all the things I liked about it, so it ended up being the one to go.

To the OP I think the takeaway is to make sure you get a chance to test the camera, esp the EVF, before you commit to it.

What's crazy is the EM5iii has an even lower res EVF than the GX9. Perhaps the EVF is one of the more expensive parts to manufacture/procure but if it's not it's really lame that Olympus tried to save a few bucks in production by slacking on the viewfinder. I know proponents will say it's good enough but I'm with you - once you've seen a G9 or X-T3 it's tough to go back. 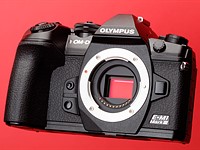