On the fp Sensor & vintage lenses.

On the Sony I can even have autofocus, if desired.

Sony with the 1953 Leica Summicron that was shown in the FP video. 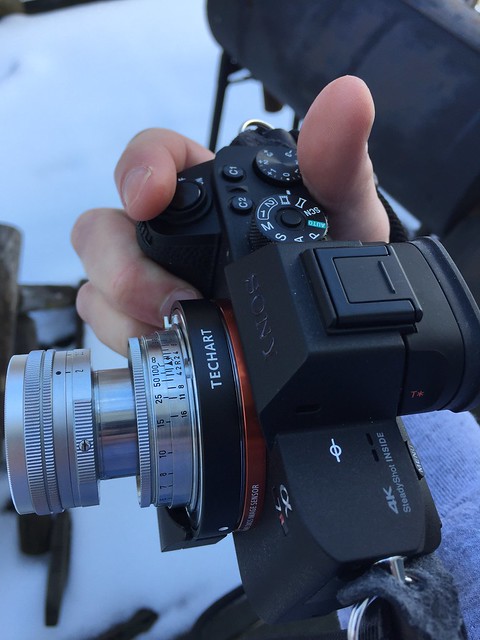 And that lens autofocusing....

Is it precise enough to focus on an eye? I'm thinking specifically of my wide aperture primes. 50mm f/1.2 (Voigtlander), 90mm f/2.0 (Summicron).

With lenses above 50mm you have to slightly pre-focus as the rack doesn't have enough range to focus completely. In operation it is a little odd to use but mostly just when changing lenses. You can't set the focal length on camera like you do with adapted lenses, you have to set it through the adapter. You do that by taking a picture at a specific aperture (set on camera) and the adapter knows what focal length that corresponds to. That is adjustable using an app too.

When you are normally shooting with the adapter you have to set the camera aperture to f2. If you accidentally change it from there you will end up overexposing as the camera will meter assuming the lens will stop down when you take the shot and of course the adapter has no control over that. Your actual shooting aperture is adjusted on lens of course.

The adapter is nice to allow closer focus. But more often than not I just use the VM-E adapter which gives closer focus too.

FWIW I'm pretty good at focusing, but it's really situation dependent when it comes to "nailing" focus.

Voigtlander 75mm f/1.8 on Sony A7. In this case it was really easy because you can just watch the focal plane move with the focus peaking - like you can on the street, just watching it move as you change focus.

But other situations are harder than this, and you could argue that this was front-focused (more on her eyelashes than her eyeballs).

It is a little complicated but if you stick with one lens not a big deal. It is really only needed for IBIS. If you have an A7 it isn't really needed, though the adapter is supposed to not work very well on those cameras. Really needs a series II or later to focus well.

BTW, I find peaking to be quite improved with IBIS. I think the lack of sensor motion helps the camera determine  and keep contrast edges a bit better.