One guess may be that lens designers used to use fewer glass/air surfaces and strived for a good balance of aberrations. But it may be computer power and modern production may allow for lenses that fully correct more aberrations.

It is more of a generational thing. When the designers of old -- Walter Mandler, Edwin Land, Robert Hopkins, Brian J. Thompson, etc -- and their peers were running the show, there was a lot of experience behind the average optical design. This experience led to lower element count designs with still good, if not outstanding performance.

These days there are more people closer to my age doing the design work, who are less experienced. There are other factors as well:

- the double gauss design is very difficult (impossible?) to bring to modern expectations of performance. You can pretty much throw as many aspheres at a good design at you want and it won't become great. Adding an element or two or three isn't a magic bullet either.

So, you feel that that double gauss designs are past their prime? With the Hasselblad I had three Planars. They may be good but limited to a given focusing distance.

I don't know about past their prime, but I do not think the double gauss can simultaneously provide:

At f/2.8 or even f/2, the situation is improved but perhaps not significantly enough.

The flare performance is also often a bit lackluster, where a retrofocus allows the designer more control in that arena.

The trend to more complex designs really started off with the Otus 55/1.4. A standard lens used to be a double Gauss, possibly with a field flattener. But, the Otus 55/1.4 is as far as I understand a Distagon kind design. The Milvus 55/1.4 keeps a similar design, but my guess is that it does not fully correct axial chroma.
Best regards

In 2011-2012, some cine zooms (e.g. Canon 15.5-47) also appeared with much higher complexity than the norm, though that is a bit outside the photographic market segment.

The Milvus 50 and 85 are both obvious derivative designs of the Otus lenses, done with fewer expensive materials.

FWIW, I once calculated that by weight the front element of the Otus 85/1.4 is ~$300 for the preform or blank it begins as. After processing and coating, this could easily be $500-$600, esp. with the high breakage/defect rate of anomalous partial materials.

Would you say that reduction in pixel sizes drives the present trends? Or it is more about new glass and new technology, like moulded aspheres and better coatings?

Reduced pixel size (= higher resolution target) drives the performance goals. There is not much in the way of "new" glass technology, but advances in processing (aspheres, reduced cost for anomalous partial dispersion glasses, more deterministic results via CNC) are enablers more than initiators here.

What about computer power? It seems that the computer industry doesn't build much faster CPUs but can have a lot of them. Do lens optimization programs make use of parallell processing?

I have used Zemax on a dual Xeon, 12c/24t machine. It was not able to saturate that, only reaching about 40% utilization.

I have only used Code V on as many as 4c/8t, but it can fully saturate that level of resource access. Code V is, I believe, largely hardcoded BLAS array operations in C/C++, with the variable OPENMP_NUM_THREADS=1, MKL_NUM_THREADS=1, etc.

Zemax is written in C#, and likely much more object oriented, which leads to much higher latency. Numerical optical modeling is very sensitive to latency, since the computation per "unit" of work is low -- e.g. a raytrace is about 10 FLOPS per ray surface. Code V's default grid is 13 rays per wvl and field, so with 3 fields and 3 wavelengths that's 117 FLOPs/surface/raytrace. Optimization will add a comparison, ~2flops/ray = 143 FLOPS/surface/trace. For 20 surfaces (fairly typical these days), that's 2,860 FLOPS/optimizer tick, plus optimizer overhead.

Because it is a latency-sensitive workload, a GPU would be slower(!) until you are tracing a few thousand rays per cycle.

The Fuji GF 63/2.8 is a bit different design, it looks like a double with one ED element. The double gauss group in front is small and there is what seems a three element group that is larger. Any thoughts on that?

It is evocative of a projection lens I designed a while ago; 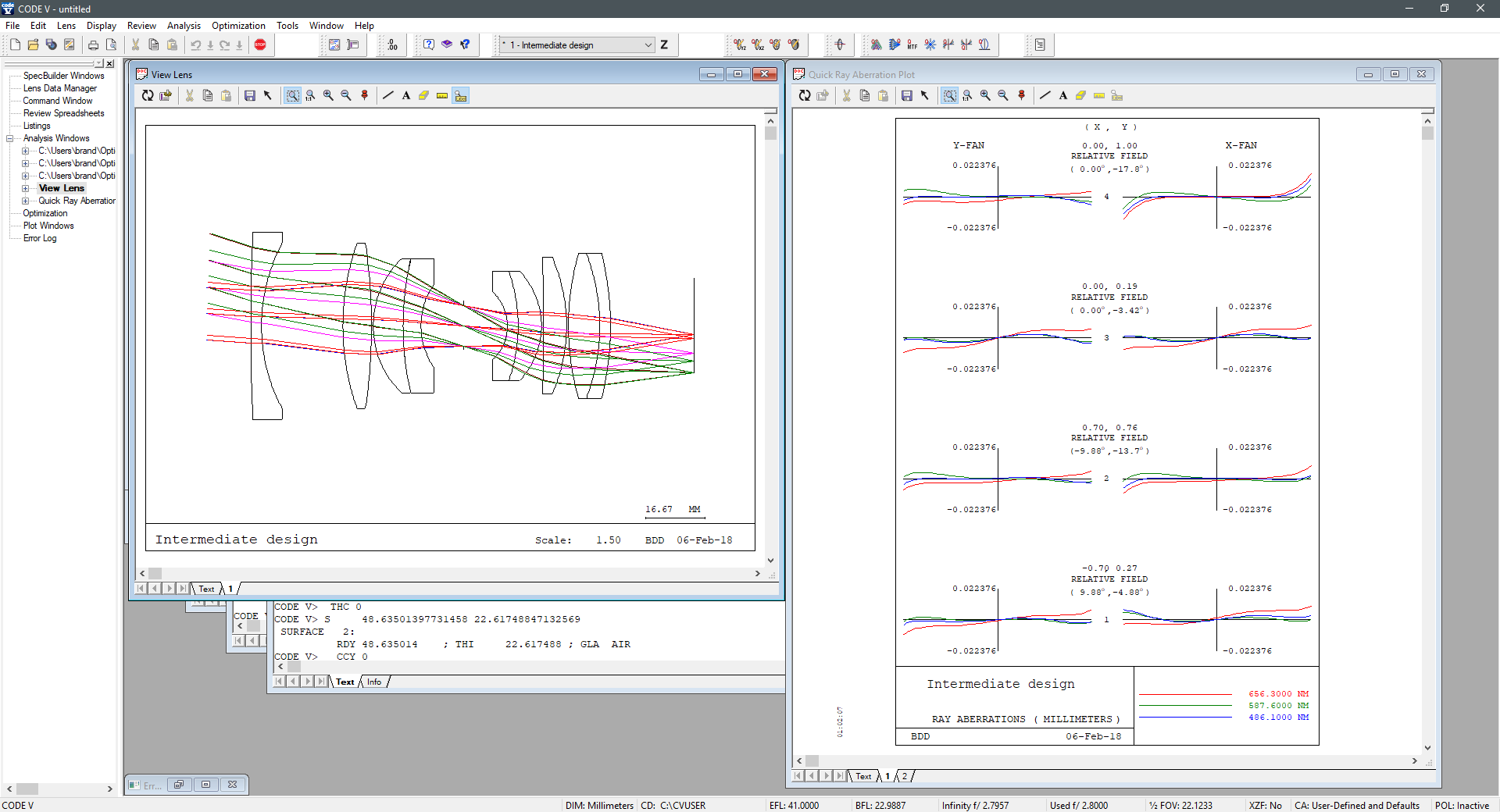 F/2.8, 22 degree FoV (50mm FF is 24 deg).  Aside from my negative front trick and lack of ED/anomalous partial materials, you can see a lot of similarity.

Their design looks like a double gauss with a split rear group (elements 6,7) and additional rear group to make the design telecentric.

Because their microlenses are small on the GFX, they probably have a poor NA, e.g. 0.35, and they need very telecentric designs to avoid massive vignetting from the coupling into the sensor

You can see that the throat diameter of their mount probably limited the F/# of this lens much more than the performance did.