Monday was one last chance to visit the higher mountains of the North Cascades before a series of strong windstorms and heavy rains put an end to summer-like weather beginning Tuesday. The fall colors were the best I've ever seen on this hike which I first visited in 1980. Until 1986 the biggest Lyall's larch stood in this basin until heart rot and wind toppled it.

Dark clouds were supposed to remain 60 miles north during the day Monday but came in anyway. There were beautiful breaks between the dark clouds that made the day even better than it would have been if the day were purely sunny.

The images below were shot mostly with the EM-1 and 12-40 lens. There are also a couple of 8mm F1.8FE shots. I seldom used a polarizer as many shots were shot backlighting the beautiful trees. 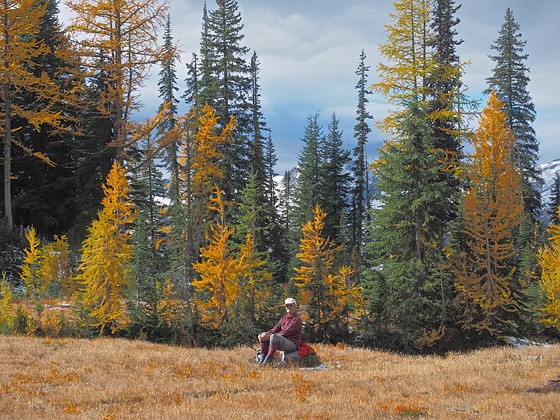 I hiked with my Brother-in-Law, Eric. We enjoyed a stunningly beautiful lunch break under sunny skies before wind and cloud became more prevalent.

The clouds were moving at a high rate of speed but fortunately at lunch we remained under sun just north of a persistent band of dark clouds.

Saffron yellow Lyall's larch trees lit by a band of sun on a high ridge as dark lenticular clouds play on the horizon. Inside the larch forest everything around is golden in a surrounding curtain of soft and colorful needles.

Ray's of sunlight backlight the Lyall's larches against a stormy looking sky.

The view to the larch-filled basin and the river valley beyond.

Higher nearby peaks are draped by larch slopes and basins under the rapidly changing and threatening skies.

Looking out over nearby Larix lyallii to larch draped slopes of a nearby ridge.

A world of color underfoot with nearby larches leading into shining larches on distant still sunlit ridges.

A view of the golden larches in the basin below with a lichen covered tree in the foreground. This tree was an alive and healthy Whitebark Pine until about a decade ago.

It's all over now. There are still beautiful fall colors in the river valleys but surely many larches will have lost there needles to high winds and rain; a dramatic end to the summer hiking season.