Yesterday I went to best buy as I'm on the verge of getting me the D7000 and I wanted to test drive in order to get a better idea how it is . I've fooled around with it bet not much . I was a bit bewildered by what I felt at first as many have said it to be like a D90 but when I compared one with the other their feel in my hands is totally different .

It feels a bit bigger in my hands , studier and more secure the the D90 . What I really liked alot was the cameras shutter release which was for lack of a better word to describe it creamy and almost silent . I really liked the feel of the camera. It does not feel like a prosumer camera but leans a bit to the feeling you get with a semi pro camera .

What really caught my attention was the D5100 . When I glanced to the corner I saw it . At first glance I told myself , "what a cute camera". Very smallish . When I picked it up and moved it around a bit I said ....Wooaa! . It feels great . It's small but my hands feel secure and just part of the camera . It has that rubbery feeling that you have with the d7000 when you grasp it .

When I took a shot the shutter release wasn't as creamy as the D7000 but it was very slient and nice . What took me buy suprise was the lcd screen which is super ( sorry for my hyperbole but the darn camera felt like that ) Viewfinder is smallish but for the size of the camera , what can you expect ? I think Nikon is gonna sell a boat load of these cameras as the feeling it gives together with the image quality is of high quality , very high quality .

Ps. I picked up the Canon 60D and even though it was nice and felt snuggly in my hands I did not like the shutter release noise it made . It was rather kind of mechanical . When I picked up the 7D expecting it to have a nicer sound to it's shutter release it sounded like a hammer hitting a piece of metal. The clerk did tell me that it had a menu option to give it a different softer sound which I did not try.. 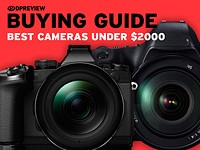