Nikon Love out of the blue (OT, Long story, but true)

Not a true D3/D2/D1 or Pro or Nikon lens post, just a true story that happened earlier tonight, which I wanted to share.

My father never believed in 'arty' things to make a decent living. He believed in skill, graft and hard work. For a long time I thought he was a bit cynical, but I realise now he just wanted his kids to have a shot at a good and profitable life, a secure future. And he simply did not see how photography would give his children and grandchildren a secure future. And I never blamed him for this. I want the best for my kids too.

I'm not a Nikon 'Fanboy'. I use Nikon, love Nikon, but have worked with Canon, Pentax, Mamiya, Toyo, Hasselblad, the lot. The reason I stick with Nikon, no matter how annoying it sometimes get, is because it just 'feels' right in my hands. But I could do the job with Canons equally well. But I might enjoy it slightly less. But, until recently, I did envy Canon for some of the lenses thay had.

Long story short, although my father appreciated the pictures I took, he never took any interest in the cameras I used. Whether it be Hasselblad, Canon , Nikon or Mamiya. To him, they were just tools.

Since my mother (his wife) died he became more lonley and visited me more often, which I do enjoy. As usual, he showed up early today and I was still doing some tedious copying work. Since I hardly ever do Macro work, I have no macro lens. Instead I bought a BR-2A and reverse my 50mm, which is all I need for this.

My father has been a mechanical engineer all his life. His specialty was CNC engineering and he was so good at it, after he retired, the company asked him to come back because none of the 'young lads' had his feel fot it. Give him a beer and he'll tell you all about it. He still does it on a consultancy basis at the age of 78.
And loves it.

So, I finished the work, put my camera dwon and he grinned. 'You got your lens on backwards, son" he said with a glint in his eyes. I explained what I was doing and showed him the BR-2a. He fell silent. He sat there for a good 10 minutes, turning it over in his hands and looking at it from every angle. "How much did this cost?" he asked. I told him. He cursed. "Tell you what, son. Paying twice that much would have been a bargain. This was not made by engineers. This was made with love.". The rest of the evening was spent showing him my entire Nikon collection. He didn't care much for my F4 and F5. The F3 and F2 held his interest for quite a while. My S3 had him occupied for about an hour. In the end I gave him a D3 and a 200/2.0 I brought home from work and he sat there grinning like a little boy for a good 40 minutes, focussing on everything in my lounge he could point it at.

After we finished dinner, we had a drink, watched some telly and when it was time to drive him home, he was still spinning the BR-2a in his fingers. Here's what he said: " Son, I may never understand why taking pictures makes you happy and even less why you can earn a living with it. Bit this here, this is more than skill. Whoever made this, made it with love, not skill."

Tomorrow I'm off work. I'm going to take my F2A and 50/1.4. And I will take them to his flat and give them to him. Because even if he never, ever takes a single picture with it, never even puts a film in it, I know he will probbaly appreaciate it more than I ever could. Finally something we share. Mind you. I've not lost it completely, the S3 stays mine. But tonight I saw a 78 year old man fall in love again. He still has my BR-2a. I never had the guts to ask for it back. All he said in the end was: "I wish I could have worked there. They would have understood me." 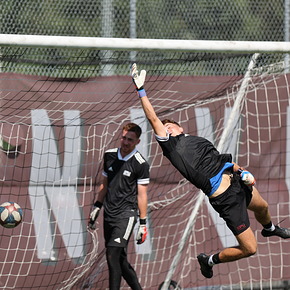