This is the continuation of a thread started by MaxKPhoto, in which he disclosed his findings regarding IR pollution of long-exposure images (30 minutes or more), when using the 18-200 VR lens. See his thread "Design flaw in all Nikkor 18-200 VR's - All models are defective" here http://forums.dpreview.com/forums/read.asp?forum=1039&message=26783756 .

So far, the only lenses that I am aware of which exhibit this problem, are the 18-200 VR and the 70-200 VR. I have confirmed that the 200 f/2 VR and the 200-400 f/4 VR do not produce any such effects. I will leave it as an exercise to other forum participants to investigate other VR lens models, and I invite them to post their results on this thread.

I carried out an investigation using my 70-200 VR. This lens produces a very distinct vertical red stripe on long-exposure images, approximately 7mm to the right of sensor center. I first ruled out reflections from potential sources within the camera body, by imaging the mirror box of my D300 over 30 minutes; the result was a completely black frame showing no IR sources.

Confirming the lens itself as the IR source was done by operating the lens on the camera, rotated away from its normal mounted position slightly so that it was de-powered, and observing that the IR pollution was eliminated.

The final step was to image the lens directly, to pinpoint the source. This was done by mounting the lens on an F100 film body, and setting up a second camera to look at the back of the lens through the open back of the F100 while it was operating. The second camera used was a D3 at 25,600 ISO, micro-Nikkor 105mm lens, at 10-second exposure time. By successive approximation of camera position and focus, I was finally able to obtain this image of the IR sources within the lens: 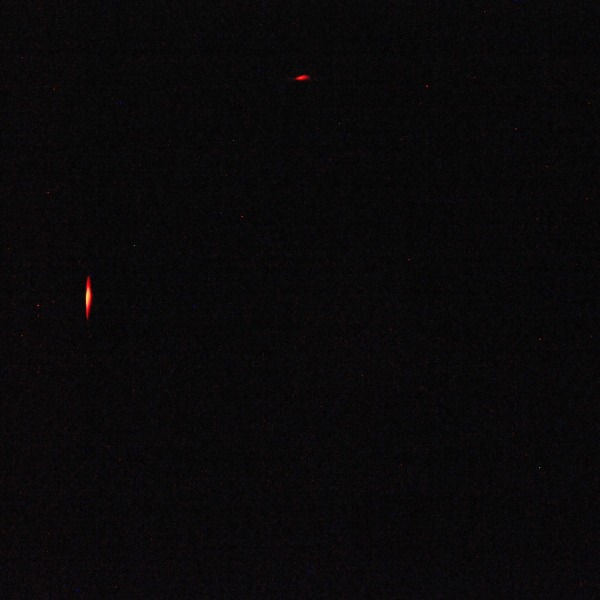 This is a crop, aligned so that the center of the crop is at the center of the subject lens. We see two IR sources (reflecting off of the diaphragm blades, I believe), one directly left of center, and a second dimmer source directly above center. The sources therefore lie on the horizontal and vertical axes, which of course are the axes along which the VR system moves the elements.

In any servo system such as the VR unit, there must be a means of position feedback to the control electronics. In various applications, we typically find potentiometers, strain gauges, LVDT's or RVDT's, and optical position sensors used for this. Apparently, the latter are employed in the VR unit. These consist of a light source, in this case an IR LED, and a phototransistor or transistor array which uses the light from the LED to read physical position. In the case of the 18-200 and 70-200 VR units, then, there must be a small amount of leakage from the IR LED which is finding its way via reflections, back to the camera's sensor.

Unfortunately, this would be beyond simple at-home measures to remedy, as it would require disassembly of the lens, and installation of masking to control the stray IR.

The best solution, at least for now, may simply be awareness of the effect, so that the user can make informed choices regarding lenses for special applications.

What's that Noise?Shedding some light on the sources of noise
Most bookmarked in this forum
Top posters in this forum
www.dpreview.com
Follow us
Mobile site
About
Editorial content
Cameras & Lenses
Community
All content, design, and layout are Copyright © 1998–2022 Digital Photography Review All Rights Reserved.
Reproduction in whole or part in any form or medium without specific written permission is prohibited.