This is what this A.F.

...So here we are, at the inevitable "dead-end street" that such evaluations/testings come down to:

We are now facing R.G.'s opinion and expectations of how the camera S*H*O*U*L*D work (in his own empirical and well-educated opinion), vs. what CANON has defined/designed as performance goals of how the AF subsystem should work.

The main problems that I see here are:

1. From the above, we do not really know the last part (what Canon's engineering has really defined as such).

2. The 1D3 performs BETTER that 1D2N at some tasks, and not so well as others, where the 1D2N comes out ahead (not my experience, though).

With these two questions, we are now at a point where we may be comparing two DIFFERENT DESIGNS, two different SYSTEMS, instead of congenital or manufacturing problems in one of them. This, ultimately, opens the door of a can of worms that can only be closed by resorting to two basic principles:

1. Define a COMMONLY accepted A/F testing procedure and conditions, regardless of the camera/system/manufacturer.

2. Conduct such tests among DIFFERENT SYSTEMS, and do so in a METRICAL fashion, and evaluate relative performance accross the test protocol.

As for my case, I continute to pull out better, faster and more accurate results with my current 1D3 than I did with my former (and venerable) 1D2+1D2N, and this is an image that I could hardly pull out of my 1D2N, basically because of the AF acquisition/tracking logic required to do so (movement in X/Y/Z axes, and target subject behind high-contrast elements). I really got impressed on how the cam. was able to LOCk and TRACK under these conditions:

In any case, there is an important lesson for both Manufacturers and Reviewers to learn from this:

==> as these high-tech toys and gizmos become increasingly more and more difficult to manufacture, refine and troubleshoot, A/F subsystems can NO LONGER stay off-the radar, totally unpatrolled and dropped from reviews, and that a common A/F testing procedure under most required scenarios is immediately required.

I will be reaching C.I.G. folks later on to poke on their views, as well as their final suggestions, and will share them (if possible) with all of you. 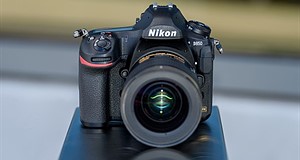