Did you notice that the samples are at ISO 100?

They use the same sensor technology, but the sensor for the D300 is far different from the one Sony is using in theirs, obviously.

We went through this last time with the D200/A100 because everybody said it was "the same sensor" when in fact the D200 used a variation on the sensor.

Although with these new Sony sensors, it seems they have made even more differences between the two. I don't think Sony is as concerned with this, they're just happy to make sensors for Nikon. Heck, I would be. 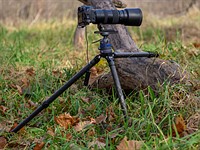