The terms masculine and feminine, if not coined by were popularized by Joe Zeltsman in the 1950. He taught my mentor Monte Zucker, who in turn introduced thousands of photographers to both the terms and Zeltsman's "Feet-Up" posing technique.

I'm not sure where Ron learned the terms, but Zeltsman's basic feminine posture is created by having a woman turn her body at an angle to the camera, place the heels more or less and point the front foot at the camera, then shift all her weight to the back foot and hip.

The turning of the body reduces its apparent size which in contrast to a more squared off pose looks smaller, more passive and submissive. What where before the 1970s considered "feminine" traits.

The placement of the feet and lining up the heels puts one leg in front of the other, which slims the appearance of the legs and eliminates any immodest gap between them.

The really magical part is the simple weight shift. Shifting the weight to the back foot and hip angles the hips and shoulders. If the woman is wearing heels the front leg will usually bend slightly at the knee breaking up the static straight line.

The weight shift also changes the shoulder angle. The back weighted hip will drop and the front will rise and that in turn will drop the back shoulder and raise the front one. The combination of the receding shoulder line and the angle of the body combined make the torso look more smaller and more passive.

From the feet up to the shoulders the curves of the woman's body will be revealed. The angle of the torso and the hip shift will reveal the curve of the hip and profile the shape of the breast against the background. By adjusting the angle of the body to the camera and the perspective via camera distance a flattering balance between the front and rear breasts is obtained. The body will fall naturally into a graceful looking S curve. Best of all the pose feels perfectly comfortable and natural.

But we are not done yet! The one thing that separates the manculine from feminine more than anything is the position of the head relative to the shoulders.

Because the shoulder line is receding if the head was squared off to it the woman's head would be tilted back and she would appear to be falling over. So we instead turn the chin back towards the higher near shoulder, and tip the top of the head towards the same shoulder. But not so much that the tendon in the neck pops out. If that happens when posing the face it the light turn the body more towards the camera to relax it. The head will be tilted towards the camera and tipped slightly downward which helps hide the nose holes. The angles are most pleasing to the eye when the shoulder line and eye line are equal but opposite relative to the horizon.

By varying the tilt of the hips and shoulders and separation of legs and arms to the body the basic feminine posture can be taken from stately and demure to smoldering and sexy.

Even if it is a H&S shot starting the pose with the feet will make everything fall into place naturally. If the woman is sitting you do the same thing, shifting the weight to the rear butt cheek so the shoulder facing the key light is raised, with the head tipped towards it. Here one I did like that way back 1979 (excuse the rotten scan):

When a man's head is turned towards the shoulders it becomes more feminine looking. As noted above the key difference for a masculine look is how squared off the shoulders look and the position of the head relative to the shoulder line. Here's a very squared off example. Another oldie, George Judd the retired CEO of the printing company were I was the Customer Service Production Manger in the late 1970s.

One of my favorite posing techniques for a guy is to put a chair on the shadow side and have him put the shadow side foot on the seat. I then have him lean forward at the waist back towards the key light. That angles the shoulder line down towards the camera. The chin is raised to tighten the the skin on the neck with the camera raised and tilted down at the same angle. It is how I took this self portrait: 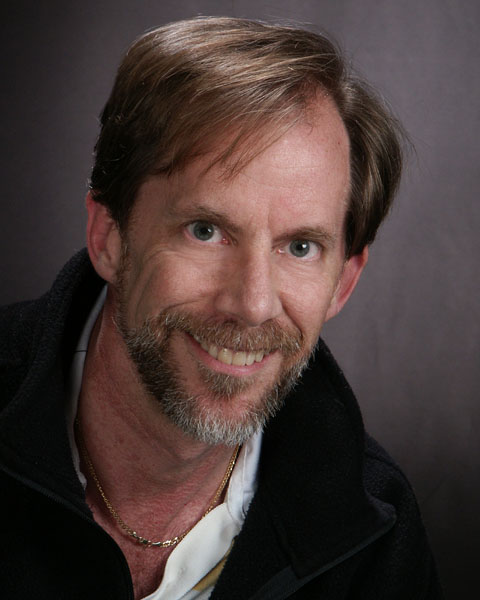 So posing is really just about body language. Zeltsman's technique of analyzing a pose from the feet up can be use for any style. If you see a pose and try to duplicate it yourself in a mirror you will learn both how it looks and how it feels. When you know how it feels you will be better able to communicate to the subject how to do the pose. It's easiest when the first instruction is "Put your feet like mine and shift your weight .... "