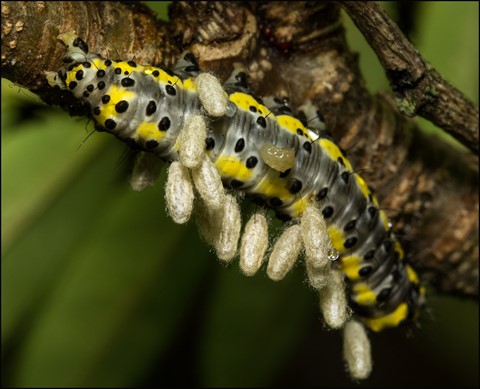 I found a number of these caterpillars close together on a tree, with no sign that they were abnormal. A few days later every single one of them was erupting with parasitoid wasp larvae. In this picture you can see a larva that's just burst through the caterpillar's skin. Within a matter of minutes it spun a silk cocoon like the others. The caterpillars remained alive and moving until after the wasps had hatched several days later. A gruesome but fascinating life cycle.
Complain
Keyboard shortcuts:
p previous n next c challenge f full size r retract vote # vote

This was one of my favourites in the challenge. It is a really unique capture of the weird and wonderful happenings in our natural world. Ruth :-)