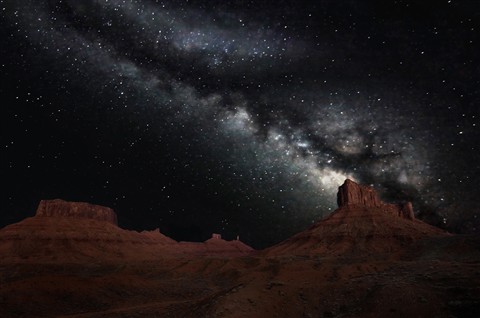 my number one, great work

I really appreciate the kind words. I have to say I am absolutely thrilled to have placed 7th. I didn't even know about this challenge of challenge winners until I got my final placement notification. There are so many wonderful images that I love and have voted for in other challenges, that this 7th place probably means more to me than the challenge win that got it submitted into this challenge.

I don't want to give away all my secrets, but I will say that although I used six separate shots, 4 of them were strictly used for contrast and noise reduction. Composition-wise this is pretty much just 2 shots. One of the mesa taken shortly after sunset, and one of the milky way taken at peak darkness.

@Roger - I used Photoshop CS4. The second shot of the milky way only had solid black where the mesas are - I used that to create a mask of the mesas. I then used the mask to remove the sky from the mesa shot, and to remove the mesas from the milky way shot. These two layers - the mesa and the milky way, were combined at 100% opacity for their respective areas. The succeeding layers used varying opacity to get the contrast and noise to the levels needed. There's a lot more to it than that, with complications brought on by the fact that the milky way was moving over the course of the shoot. All in all it took 90 minutes to shoot and about 20 hours to process (although more than half that was trial and error in learning on the fly how to process the shot).

Part of this was also luck. I knew where the Milky Way would be, but I didn't know how much the mesa on the right would block it (we were MUCH closer to the mesa than the photo shows - it loomed quite large in the foreground). It was only after the milky way started showing up in the images (well before we could see it), that I knew we were OK. (when I saw 'we' my wife was also shooting).

As a novice, I am interested in knowing how do make a composite of several images. What software do you use. Would appreciate your help

This truthfully deserved higher than 7th place! It is breathtaking.

Outstanding image; really great how you did so successfully smith the overall amazing scenery together into this presentation of a phenomenal happening. Kudos !

wow, this is stunning... That picture was taken the exact same day that I lay on a rock in Arches National Park gazing at those wonderful, wonderful stars... and at the same time cursing my fuji f200exr for not allowing shutter speeds slower than 8 seconds.