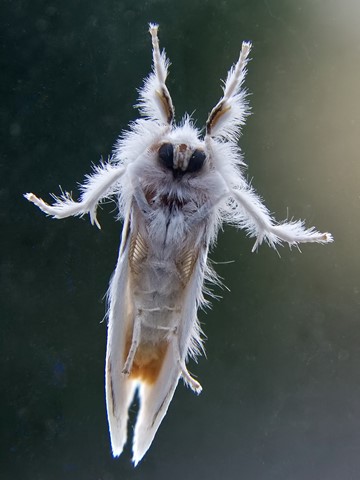 (Euproctis similis -female) The female is larger than the male, and has a large tuft of yellow hairs at the tip of her abdomen, which is used to cover the newly-laid eggs. It flies in July and August, occupying a number of habitats, and is relatively common in England and Wales. It is found throughout Europe as far as the Urals, then east across the Palearctic to Siberia, and also found in Sri Lanka. It is also known as the "Goldtail Moth" or the "Swan Moth".
Complain
Keyboard shortcuts:
p previous n next c challenge f full size r retract vote # vote

Cheepers, you fooled me. I thought that it was a moth in flight image......
Regardless, it is a very nice capture, thanks.

Thanks to all of you for your supportive posts, they are very much appreciated. The moth was actually on the outside of our upstairs study window, so the shot is taken through the glass and was taken hand held. It also showed that the window needed a good clean! As there is a very thin line between love and hate it can be argued that such a thin line exists between beauty and scary (or any other opposite) - to me, as it presents here, it looks like some alien monster which could be not very pleasant.

Is it standing on glass?

Way to go! One incredible image!

Excellent, photo, but that moth is less scary and more beautiful!