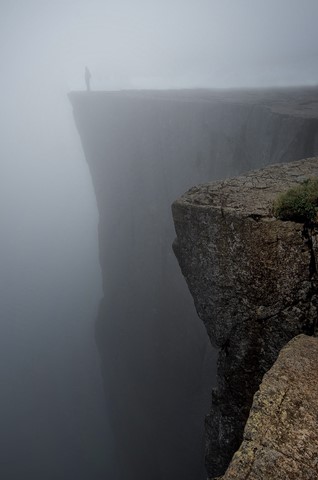 Man, that scares me.

You can't please all of the people all of the time , so why worry about it. Great atmospheric shot , reminds me of a few scary moments when wandering about the mountains in Scotland , when a sudden enveloping mist or low cloud descends . If you are near a dangerous drop it certainly makes you pay attention on the upside it gives one a feeling of being the only person in the world

I seriously do not understand the voting scores in the challenges. You give a score 1-5 for any number of images. A one is worse than no vote. Which do not make sense. And then, there are so many challenges so the voters are spread out thin, totally destroying any statistical fairness. Some few friends can put you in a high position.

So, I have stopped voting and a long time ago stopped participating. Lots of crap images always get kind of high scores. Somehow, the winner is often worthy though. I wonder how?

BTW - look at number 7 in this competition. It has ten votes for 3 and two for 4.5, zero votes for all other points. Sure, it can be pure chance when the number of voters are so few, but it sure looks very suspicious.

a nice mood shot! That fog conveys the sense of a bottomless depth, well done

Thanks everyone for your kind comments! Follow me on 500px "https://500px.com/candide"

I thought 500px was closing down?

Very nice images you have there though.

Not for me ! I got scared just looking at the photo. Imagine what it would be like actually being there !

Miami might seem safe but there are overpass bridges.

Great shot. Makes a mental note ~ must get out in the fog.

Try to stand upright just at the edge there, keep staring into the ravine at the very base of Preikestolen! With 2 people ready to catch you, while testing the interesting effect... -lacking all references in one's side-view.
Yes, an experiment with 20 contenders was conclusive:
Even if concentrating heavily on not shifting one's balance, 15-20 seconds later was when most contenders started to heel towards a free fall ...

The context: A bunch of newly enrolled Norwegian navy recruits on a sunday trip to Preikestolen (off duty), arranged by one of the camp's priests(!) named: Odd Christian Reme, summer of -81. Each new contender, becoming more and more determined:
'I will NOT loose my balance! They'll have to give up waiting for the effect!'
Think I was approx. the10th one, still: Less than 20 seconds later, without noticing, I started to heel the 'wrong' way ...
20 out of 20 did.

Check 'Mission Impossible 6' coming up, with action scenes from Preikestolen!

There are some spectacular heights in Norway, e.g. Trolltunga, Preikestolen and Kjeragbolten. And this was an unusual image of Preikestolen.

What is also a consideration is that at high heights wind gusts can be strong and knock one off balance - believe me I know and two weeks ago I hiked to the top of a 5,000+ foot mountain on a very windy day and could not stand on the tip top due to winds which were 50-60 mph with 80-90 mph gusts. Sadly, i left my eye glasses on the top.

Don't jump! There are other women!

What a great photo!

Nice job, a different take on this shot.

I worked as a steel tower lineman so I am use to heights but looking at this makes me feel nervous. Good job.