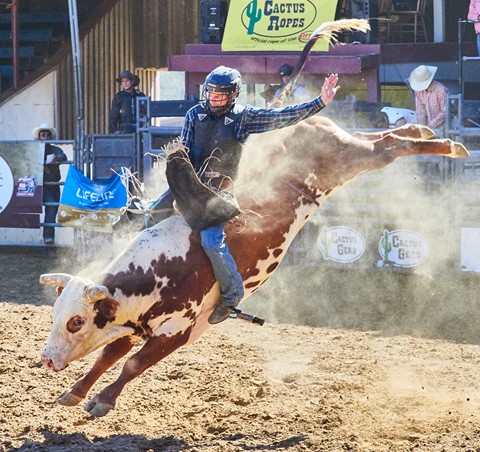 The bull has been a symbol of power since ancient times. The Greek hero Theseus killed the Minotaur, a creature that was half-bull (tauros in Greek) and half man. To kill the Minotaur, Theseus had to navigate the labyrinth on the island of Crete, which he did with the help of Ariadne, the daughter of Minos. The Minotaur was the “unnatural” offspring of Pasiphaë, the wife of Minos, and a white bull. Under the spell of the god Poseidon, Pasiphaë had fallen in love with the bull and mated with it by climbing inside a wooden cow constructed by Daedalus. In the modern-day rodeo, bull riding is called the most dangerous 8 seconds in sports, because 8 seconds is the amount of time the rider is supposed to stay on the bull.
Complain
Keyboard shortcuts:
p previous n next c challenge f full size r retract vote # vote

Thanks very much! I really appreciate your comment. The bull was much more impressive in real life!
Best regards,
Jeff