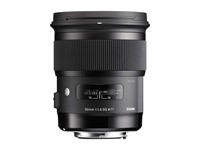 Sigma is getting Black Friday started early this year, offering discounts on five of its lenses online now through Monday, November 30th including the 50mm F1.4 DG HSM Art. Savings range from $100 up to $300 off individual lenses - and considering the current results of our readers' poll, a few of you may be interested. Read more

Canon's CE-SAT-IB satellite camera was destroyed alongside six other satellites during Rocket Lab's ironically-named 'Pics or It Didn't Happen Mission.'

This sample gallery includes images from our recent review of the Tamron 28-200mm F2.8-5.6 Di III RXD zoom lens. Check out these photos to see how it performs, from wide-angle to telephoto and everything in between.

Kodak Portra 800 is a wonderful and versatile color film. And any rumors of it being discontinued, we're pleased to report, are simply untrue. That's a good thing, because it's capable of producing lovely results in all sorts of conditions.

Boering has left the World Press Photo without much of an explanation from either him or the organization, but he tells DPReview the COVID-19 pandemic is forcing the WPP to change the way it makes money.

Will vlogging change your next camera?

The Sony ZV-1 and Panasonic Lumix DC-G100 are the first cameras we've seen that are overtly designed with vlogging in mind – and the changes they represent could have implications for the future of all cameras.

Olympus is showing final images of its under-development 150-400mm F4.5, which it says will arrive this winter. An unspecified macro and 8-25mm F4 Pro have also been added to the lens roadmap, and the E-M1X's AF gains bird detection.

The scam, which involves sending fake copyright violation notices, has been circulating on the social media platform since at least June 9.

Fujifilm is one of just two producers of tape media (the other being Sony) and it is hard at work on a breakthrough that will allow single tape storage drives to offer 400TB capacities in the coming years.

The National Parks Service says it's investigating the incident, which took place just two days after the park opened following a shutdown due to the COVID-19 pandemic.

Professional full frame lenses are usually large and have fast apertures. In this episode of DPReview TV, Chris and Jordan argue that there's a need for slow professional lenses – inspired by some of their favorite Micro Four Thirds lenses.

The camera maker joins Olympus, Fujifilm and others is a legal tussle over US digital camera technology patents held by DigiMedia Tech.

A decade of sun: NASA captured 425 million photos of the sun and made a time lapse

NASA's Solar Dynamics Observatory (SDO) photographs the sun every 0.75 seconds. In its first decade in space, the SDO has captured more than 425 million images of the sun. NASA has compiled these images into an amazing time lapse, come check it out.

The lens is available for Leica M, Sony FE, Nikon Z and L-mount camera systems, and now holds the title as the world's widest rectilinear lens for full-frame camera systems.

Tamron's new 28-200mm F2.8-5.6 is a versatile zoom lens for Sony E-mount. Well-suited for travel photography, it's compact, lightweight, and fast/quiet to focus.

Fujifilm has announced that its GF 30mm F3.5 R WR wide-angle lens for its medium format cameras will ship in late July or early August.

Fujifilm's latest lens is a sharp, reasonably compact and well-built wide-angle for the company's GFX medium-format cameras. We took it out and about in the warm Seattle summer with the company's 50 and 100 Megapixel camera bodies to see what it can do.

Fujifilm has issued firmware updates to the GFX 100 and GFX 50 models, with the 100MP camera gaining the most significant improvements.

Although the channel is still growing, it currently has nine videos that offer concise overviews of just a few of the cameras Japan Camera Hunter founder Bellamy Hunt has sitting around his Japanese storefront.

ON1 has launched ON1 360, the latest version of ON1 Photo RAW 2020 with ON1's new Photo Mobile application for iOS, iPadOS and Android mobile devices. The new solution syncs raw processing between your mobile device and computer.

Switching screw-on filters between lenses of different thread sizes is much quicker with the Revoring adjustable step-up ring. It uses a sprung iris that expands to fit a range of filter thread sizes, so a single filter can be used on multiple lenses

That's right folks, you heard it here first. Read on for the full interview, with Kenji Tanaka of Sony.

We've updated our Best cameras under $2000 buying guide, and the Fujifilm X-T4 is our top pick for those seeking a camera that excels and both stills and video shooting.

Chris and Jordan didn't forget about stills when they previewed the video-centric Panasonic G100 earlier this week.

The Canon EF-M 11-22mm F4-5.6 is by no means a new lens, but it's one we've been shooting with over the years, and appreciate for its compact form, solid build and useful wide-angle range.

Google Street View is unavailable in Mauritius, so one resident created his own using a DJI drone

Mauritius is a remote island off the southeastern coast of the African continent that's never had Google Street View. So, an island resident, Reuben Pillay, decided to use his own DJI Phantom 4 Pro drone to create more than 220 high-resolution 360-degree images of the island.

Video: Explaining why you SHOULD overexpose the highlights in certain photos

Pye Jirsa explains how blowing out the highlights in an image — usually a no-no in the world of photography — can result in a 'perfectly imperfect' photo that feels more authentic and natural.

Jun 26, 2020249video
Tips or suggestions? Contact us!
More articles »
www.dpreview.com
Follow us
Mobile site
About
Editorial content
Cameras & Lenses
Community
All content, design, and layout are Copyright © 1998 - 2020 Digital Photography Review All Rights Reserved.
Reproduction in whole or part in any form or medium without specific written permission is prohibited.