Canadian device manufacturer Research in Motion is going to publicly launch its much anticipated Blackberry 10 OS and devices at a press event on January 30th. However, prior to the launch a lot of information is already available all over the internet. An Austrian website has now published a seven minute long video walk-through of the new Z10 smartphone. The video is in German (with a charming Austrian accent) which gives me the rare opportunity to apply my German language skills on the job.

According to the video the Z10 will have a 4.2-inch 720p touchscreen which, given the recent annuncements of various 5-inch 1080p devices, is unusually small and low resolution for a top-end device. It'll be powered by 1.5 GHz dual-core processor and images can be captured with an 8MP camera and LED-flash. 2GB RAM are accompanied by 16GB of storage memory.

After listing the specs the presenter goes on to demonstrate the operation of the BB10 OS. You can swipe from every edge of the screen to open a task manager, clock screen, the Blackberry messaging-hub and other screens. Apparently there is also going to be a part two of this video, looking in more detail at the apps and speech operation features. However, the sequel has not surfaced on the web yet at this point (via Wired).

Click here to discuss this device in our forums

BlackBerry Z10
DPReview score: 69%
We are retrieving offers for your location, please refresh the page to see the prices.
View Comments (3)

Z10 is a stupid name...I can't believe they haven't introduced a BlackBerry Pi model to help resurrect the company.

Happy to see a 4,2" 1280 display on a top end device.
And the Nokia's stepchild the N9 has been a great source of inspiration for the UI which is a good thing.

iFixit finds flagship phone easily fixable, unless you drop it on its ultra-thin display.

As RIM readies to officially launch BlackBerry 10, we look ahead at the new OS.

An Austrian website has leaked a video walk-through of the Blackberry Z10 smartphone (via Wired). 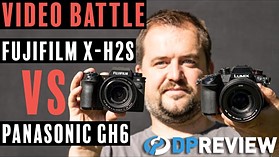 In addition to a forthcoming 70-180mm F2.8 lens (which looks like it could be another reworked Tamron lens), Nikon revealed it's working on a 12-28mm PZ lens for APS-C Z-mount cameras as well as a pair of fast primes: a 35mm and a 135mm.

We were able to get our hands on Nikon's new Nikkor Z 17-28mm F2.8 just before its launch, so here's a little insight into what it is, how it handles and what its sample images can look like.

This Nikkor Z lens shares the bulk of its specs with Tamron’s 17-28mm f/2.8 Di III RXD lens, but gains Nikon-specific features, such as a customizable control ring.

Never seen before: watch an FPV drone fly into the water and reemerge

A pilot known as Blastr has created a first-of-its-kind video with a rig he built himself. Watch as an FPV drone flies into the water and reemerge.

You can now access Topaz Labs' denoise, sharpening and upscaling capabilities in a single app that can be used standalone or as a plugin with Adobe Photoshop, Adobe Lightroom Classic or Capture One.

The grip-style cage is reported to have an integrated CFexpress Type A adapter so the camera can write directly to the M.2 SSD inside the grip.

Some iPhone 14 Pro users experiencing camera wobble in Instagram, Snapchat and other apps

Reports coming in across various social media platforms show iPhone 14 Pro and 14 Pro Max users experiencing camera shake from the main 48MP module when using it in certain third-party applications, such as Instagram and Snapchat.

Slideshow: Winners of the 2022 Astronomy Photographer of the Year awards

The final winners have been announced for the annual Astronomy Photographer of the Year awards put on by Royal Observatory Greenwich.

DPReview TV: iPhone 14 and 14 Pro cameras - What you need to know

Following the announcement of Apple's new iPhones there has been a lot of confusion and misinformation online. Chris and Jordan take a detailed look at the photo and video upgrades to let you know what to expect.

The three new tripods in this system each use what Arca-Swiss calls a variable interval rotator to evenly pan across a scene with the help of indentations that audibly click into place when rotating to capture the photographs.

Both lenses will have onboard chips and electrical contacts for transmitting EXIF data and providing the required information for in-body image stabilization support and focus confirmation support on compatible Z-mount camera systems.

Hawaiian film photographer Lisa K. Cho shares her work, and how she learned to weather the uncertainty of COVID and connect with her subjects over the course of a three-year project.

The updated Summilux-M 35mm F1.4 ASPH has more aperture blades and a shorter focusing distance than its predecessor. It also has an integrated lens hood and a cheaper price.

Dries Depoorter’s The Followers highlights the privacy concerns of open cameras and the ability to track down nearly anyone with a little time and know-how.

Sep 15, 202248
Tips or suggestions? Contact us!
More articles »
www.dpreview.com
Follow us
Mobile site
About
Editorial content
Cameras & Lenses
Community
All content, design, and layout are Copyright © 1998–2022 Digital Photography Review All Rights Reserved.
Reproduction in whole or part in any form or medium without specific written permission is prohibited.