PMA 2008: PMA 2008 is almost underway and to kick things of we're at the Sony press conference. We'll update this story as and when we have any information about new announcements. Updated with pictures of new sensor and flagship model mockup.

Key points: No high end DLSR announced today, but a little more detail: It's going to be a full frame 24.6MP CMOS model with Super Steady Shot stabilization, and it's coming this year.

09:07: Haber is giving a general overview of the state of the imaging business, things are going well with record sales of Cyber-shot. Talking up the 'ease of use' innovations such as Face Detection. Very happy with the results of Sony's entry into the DSLR market. Making good progress (no hard facts or figures).

09:10: Shigeki Ishizuka, President of the Digital Imaging Business Group is giving a history of Sony's involvement in the DSC business, going back to the original Mavica system in 1981.

09:12: First Cyber shot announced in 1996, will have sold 100 million at some point this year. Talking about the importance of 'HD Photo' (HDTV output on still cameras).

09:13: Mr Ishizuka is talking about the new Live View system in the cameras announced yesterday. Oh and the wonder of 'smile capture'.

09:15: Announcing the launch of the 'S-Frame' digital photo frame system.

09:17: 'Creating and Spreading New Digital Lifestyles'. Quite ambitious that.

09:18: '2008 Alpha proceeds onto main stage'. Covering the segmentation of the DSLR market, and how Sony is filling the 'ease of use' and 'high quality' gap. Reseach from consumers and buyers of the A100 led them to develop new Live View system. Needed to be suitable for entry-level users and had to be quick, not impacting on focus speed.

09:19: Concept video for the new Alpha products. Very loud for this time of the morning. Lots about the advantage of the new live view system.

09:21: Alpha 300 / Alpha 350 features. Quick AF Live View - as fast as shooting with the optical viewfinder. Ideal for customers who want the SLR quality with compact camera ease of use. Nothing new so far; we're getting a detailed run-down of the new features and improvements of the models announced thus far this year.

09:22: Now here's the breaking news. We revealed last year that we would be announcing a high end Alpha. Development is continuing. Here's some detail of the sensor it will be built around. 24.6MP Full Frame CMOS sensor. It will be available by the end of this year (we're guessing a Photokina announcement).

09:23: Guy from DSLR development has taken the stage. Talking about Sony's image sensor ('Exmor'). They're working on the development of the new CMOS full frame (for the flagship model) and he's talking about the new CCD sensor developed for the A350.

09:27: Super Steady Shot for the Full Frame sensor is confirmed. Apparently there's a prototype here we can see in action.

09:28: Onto lenses (looks like that's all we're getting on the flagship model for today). Talking about the 2-70 and 70-300mm lenses announced yesterday and promising there's more to come.

09:29: Now talking about the growing Alpha system from entry level to high end and wrapping up this section. Thank you very much.

09:30: There's a lady on stage now who appears to be talking about cameras but there are so many buzzwords ('leveraging user experience') that I'm not sure.

09:31: We're onto Cyber-shot now - covering the new technologies featured in the products announced this week. Apparently 'the camera's not calling you stupid' when it refuses to take a picture unless it's happy everything is right and the subjects are all smiling. Not sure what Adult Priority mode is...

09:33: Talking about the shared technologies across the Sony product range (Bionz processors in camcorders, DRO trickling down from Alpha to Cyber-shot and Handycam). Face Detection for video debuting this year.

09:40: We've moved onto professional digital photofinishing now. Not a lot to say about that really.

09:41: Back to Steve Haber for closing comments and thanks. That's all folks. 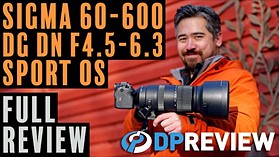 Report: Sony has moved over 90% of its camera production out of China

According to Japanese financial publication Nikkei, Sony has moved nearly all of its camera production out of China and into Thailand, citing geopolitical tensions and supply chain diversification.

Got a new camera? Get started with your Canon EOS R7 by changing these critical settings.

A pro chimes in with his long-term impressions of DJI's Mavic 3. While there were ups and downs, filmmaker José Fransisco Salgado found that in his use of the drone, firmware updates have made it better with every passing month.

DPReview TV: The best camera for landscape photography (at 3 budgets)

Landscape photography has a very different set of requirements from other types of photography. We pick the best options at three different price ranges.

AI is here to stay, so we must prepare ourselves for its many consequences. We can use AI to make our lives easier, but it's also possible to use AI technology for more nefarious purposes, such as making stealing photos a simple one-click endeavor.

This DIY project uses an Adafruit board and $40 worth of other components to create a light meter and metadata capture device for any film photography camera.

Scientists at the Green Bank Observatory in West Virginia have used a transmitter with 'less power than a microwave' to produce the highest resolution images of the moon ever captured from Earth.

Formula 1 POV: All F1 drivers to wear Driver's Eye micro cameras inside their visors in 2023

The tiny cameras, which weigh just 1.4g, fit inside the padding of a driver's helmet, offering viewers at home an eye-level perspective as F1 cars race through the corners of the world's most exciting race tracks. In 2023, all drivers will be required to wear the cameras.

The announcement is believed to be the M.Zuiko Digital ED 90mm F3.5 Macro IS Pro lens, which was confirmed on the OM System roadmap last year.

Finer Points: What would you want to see in a hybrid camera? For me it’s shutter angle and 32-bit float audio

There are plenty of hybrid cameras on the market, but often a user needs to choose between photo- or video-centric models in terms of features. Jason Hendardy explains why he would want to see shutter angle and 32-bit float audio as added features in cameras that highlight both photo and video functionalities.

You can purchase custom high-res satellite imagery for under $200

Nikon’s Z50 gets eye-detection AF for video with 2.40 firmware update

The firmware update adds eye-detection AF to video capture and improves autofocus performance in other modes.

If it's cold outside, here's what you need to know to operate your drone safely

In some parts of the world, winter brings picturesque icy and snowy scenes. However, your drone's performance will be compromised in cold weather. Here are some tips for performing safe flights during the chilliest time of the year.

The winners of the Ocean Art Photo Competition 2022 have been announced, showcasing incredible sea-neries (see what we did there?) from around the globe.

Venus Optics has announced a quartet of new anamorphic cine lenses for Super35 cameras, the Proteus 2x series. The 2x anamorphic lenses promise ease of use, accessibility and high-end performance for enthusiast and professional video applications.

Testing the Fujifilm 56mm F1.2 WR for use as our studio lens

We've shot the new Fujinon XF 56mm F1.2R WR lens against the original 56mm F1.2R, to check whether we should switch the lens we use for our studio test scene or maintain consistency.

Nature photographer Erez Marom continues his series about landscape composition by discussing the multifaceted role played by the sky in a landscape image.

Check out some of our full resolution Canon EOS R6 Mark II photos, captured over the holidays and in the mountains.

The NONS SL660 is an Instax Square instant camera with an interchangeable lens design. It's made of CNC-milled aluminum alloy, has an SLR-style viewfinder, and retails for a $600. We've gone hands-on to see what it's like to shoot with.

Recently, DJI made Waypoints available for their Mavic 3 series of drones, bringing a formerly high-end feature to the masses. We'll look at what this flight mode is and why you should use it.

Astrophotographer Bray Falls was asked to help verify the discovery of the Andromeda Oxygen arc. He describes his process for verification, the equipment he used and where astronomers should point their telescopes next.

Micro Four Thirds has 'size benefits, and a shooting experience that can’t be matched by a smartphone,' says the director of Panasonic's camera business, as we talked about the system's future, the role of video, the adoption of phase detection and the role his dog played in the development of the S5 II.

Finer Points: Auto focus boxes need an upgrade, give me a rainbow in this monotone world

Today's modern cameras are armed with sophisticated autofocusing systems. They can focus anywhere in the frame, track multiple subjects, and switch on the fly. But what good are these advanced tools if you can't see where the camera is even focusing? It's time for the autofocus box to upgrade from its single-color status.

Hands on with the Panasonic Lumix DC-S5 II

The Panasonic Lumix DC-S5 II is a powerful mid-range full-frame stills and video mirrorless camera that introduces on-sensor phase detection, 6K 'open gate' video, LUTs for still mode and more. We put the camera through its paces during a hands-on trial run in the real world.

The new FE Sony 20-70mm F4 G has an extremely versatile zoom range, but how do the pictures look? Check out these full resolution 60 megapixel captures!

Sony has confirmed it’s developing a high-end 300mm F2.8 telephoto lens for its E-mount camera systems. The lens will be a part of the company’s high-end G Master lens lineup.

Jan 18, 2023392lens news
Tips or suggestions? Contact us!
More articles »
www.dpreview.com
Follow us
Mobile site
About
Editorial content
Cameras & Lenses
Community
All content, design, and layout are Copyright © 1998–2023 Digital Photography Review All Rights Reserved.
Reproduction in whole or part in any form or medium without specific written permission is prohibited.